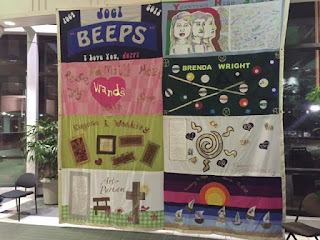 I know World's AIDS Day is a few days away, but I have a post already slated for that.

Last night I went to an event called Yoga of Remembrance. We actually held the practice amongst sections of the AIDS Quilt.

I've seen the quilt before, of course. At the time, in the very early 90s, it was what was the full quilt at the time. Unfortunately, it grew larger as the years went on.

The practice itself was fair - at best. The folks who arranged it, and the instructor who led the practice, did nothing - NOTHING - to tie in the remembrance piece. I'm not quite sure why they did this, as it was held in the lobby of a hospital.

That one actually made me stop to think.

It is rare you hear of anyone dying of an AIDS related illness these days. Back in the day, I knew way too many folks, many with their own panel. If you are to believe the news of these days, people live mostly normal lives, assuming they see their doctor, are on meds and actually take them.

"They" say it is a manageable disease - and it can be. What they don't always says is, the disease manages the person as much as the person manages it. What you eat, when you eat it, activity levels, things of those nature.

I've worked in many a hospital. I could not believe the folks who were ok with walking around the lobby barefoot while waiting for the practice to start. I mean, I know they clean these places, but even I know better than to do that.  When I took off my socks - eventually - I stayed on my mat.

I'd say one-third of the 25 participants were new to yoga, so it was not a vigorous practice at all, and the floor was unforgiving. And with five assistants, one got adjusted constantly.

And I loathe lax instructors. If you have a start / end time, stick to it {she didn't}  If you can't or won't use a microphone so people can hear your instruction, don't use music - especially if it is louder than your voice {she did / it was}.

And as g-d is my witness, don't have someone with a guitar singing something in Hindi after the practice, but before the 'namaste'.  .....and expect you to sing along after mumbling the words for us to sing.....liked we'd know them after that brief intro.

That last act is just one of selfishness. Sorry, but it is. You're doing it for your own performance ego and nothing more. And it goes on and on and on and on and on.  I've seen it before. I'll see it again. There were few enough of us there that I'm sure they saw me rolling my eyes while I didn't even pretend to sing along.

As we hit the five minute mark of the song with maybe five words, repeated over and over and over....I started to think about the folks with those panel quilts and briefly thought how lucky they were to be gone and not to have to listen to this drivel she called 'singing'. 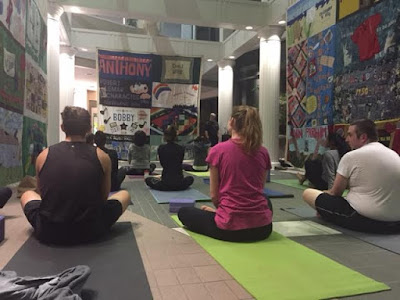 At least the guy in front of me - with the man-bun - had great arms and possibly the best Balancing Half-Moon I have ever seen.

A man-bun and a Balancing Half-Moon? You really did strike it lucky.
JP

One rarely sees the quilt these days. It still holds a lot of emotion for me. Emotions for all I lost and emotions about a government that ignored an epidemic.