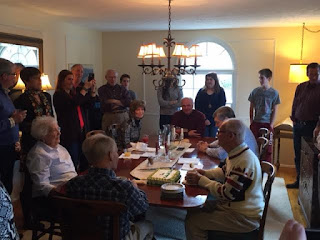 Sunday I attended a birthday party for my uncle. He turned 95.

Normally, I'd say, "isn't that something?", except for the fact that his 97 year old brother was in attendance. That is something.

My almost 87 year old mother - their sister - hosted the shindig.

For the record, neither the 95 or 97 year olds drove to the party.

My father died when he was just shy of 94. His mother when she was 94.

For long time readers, you might have remembered all of this. So these two brothers comprise my mother's side of the family, and you just saw my father's side.

So, as I've said in many previous posts, I'm not getting out of this life early - at least unless I'm visiting Paris, Mali or Belgium.

My remaining three cousins were there - all of them with some of their kids.....and then some of their kids. Yes, my first cousins on both sides of my family are considerably older than I am. Their children are my age.....hence the reason they have their own kids.

The morning and afternoon were ok. Like any large event, I probably spent a few minutes with most guests, though I did seek out my second cousin, Louise, to sit and talk with her and her husband.

Some of these second cousins are in their 50s, though most in their 40s. And still they have at least two grandparents alive. How is this possible? Granted - I might have been, as Morty's mother called him, "a pleasant surprise" (and my little sister a downright accident), but most of my grandparents were dead by the time I was 13.

Overall, most of those cousins are a nice bunch, though if the conversation turns to politics - and it usually does - I find another group of people to gravitate towards.  Or worse - at least three in attendance are police officers. Good men, for sure, but talks of "right or wrong" in policing that come up just could go south fast. I will say - one of them had a little talked about perspective on policing and the current climate, but more for that at another time.

Still it was an amiable afternoon - and I made it through without one drink. And I think that was the holiday miracle! 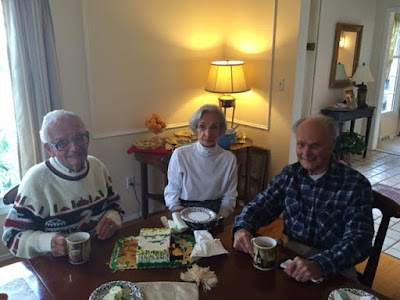 And here is a picture of my mother and her brothers.

wow! what a family! They all look terrific! it give me hope that i'm only halfway there rather than 2/3's of the way. As long as I can keep my wits about me (somedays that seems tenuous), getting old isn't so scary.

A good-lookin' bunch! Here's to longevity.

I can only hope to look that good when I am in my 90s. mazel tov to all!

I always knew you must have terrific genes. Mine stink.
Jean-Paul

I remember, way back when, meeting my Great-great-grandmother at a family reunion in Texas. She had to leave the festivities early because, at age 98, she drove the bus for the "old folks home" and the resident had a field trip planned.

Great looking family you have there.

Figures, you are here for the long haul. Ornery people usually are. ;-)

You are quite fortunate to have such longevity in your family. All 4 of my grandparents were gone by the time I was 24. Enjoy your time with these 'experienced' people! ;-)

what a great achievement. happy birthday and good living