I'm Burning For You 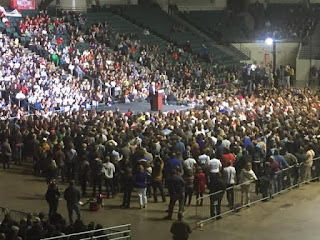 I have a problem with Bernie Sanders' presidential campaign.

It is not his message. That is on point. I admire him for laying his cards on the table. I like the way he won't monger fear, just to get his name above the fold. I understand his position without demeaning his competitors. He doesn't have a superpac. He's not taking corporate money.

No, my issues are small, but possibly tell-tale.

Bernie was in Cleveland on Monday for a rally. I actually, drove downtown to attend. 710 met me on his way home from work. Via Facebook, I signed-up to attend.  Fine.  It took me to a Bernie Sander's rally link (not FB), to get 'tickets'.  Fine. I gave them the demographic info they needed for said tickets...........then nothing.

One didn't need a ticket to get in - not that anything actually said that. But then why the pretense? I know it's for my phone and email. I get that. But I expected a 'voucher' or confirmation to be sent to either. Nope.

At the event - they asked folks to sign a petition to get Sanders on the Ohio primary ballot. To date, he doesn't have the 6,000 signatures to get on the ballot. If the man speaking was correct, they had 345!  For the entire state!!!!  I'm hoping by nights end he was much closer to, if not past, the goal.

The volunteers had to make sure, because there were different places to sign the petition depending on what county you were in. Ok folks - get it together. Ask me first, so things don't get invalidated later.

And why does it matter what county? You don't petition county by county to get on a state ballot.

The first (and only) speaker before Bernie was Rep. Nina Turner, who just last week changed her endorsement of Clinton to Sanders. She was great. She was charismatic. She was not introduced to the 6,000 or so who were in attendance as she came to the stage. Nor should she have had to introduce herself at such an event (not that she did either, I might add).

....and someone really should have prepped him that there is no State of Ohio University.

It's these little gaffes that bug me for someone running for the highest office. There is only so much down-home folksy you can be. At some point - superpac or not, no corporate funding or not - you have to have a professional campaign, at least behind the scenes. Pretend you're as grassroots as you want on the surface, but really - get it together.

As we sat and waited for things to get going, I don't think it was only 710 and myself who had Paris on our minds. Though we acknowledged it a bit later, we had looked for exit routes. I checked the semi-open rafters to see who could access them.

And Sanders started off somberly, speaking of Paris and ISIS. He acknowledged the tragedy, but was quick to follow-up with how he thought Obama was doing the right thing and building a coalition - even with Musilum dominated areas who are not traditionally our allies. He reminded us of 2003 and going into Iraq - and it's ok to be strong, but not to be stupid. He called out GWB on being both. He basically called - without mentioning names - other candidates the same.......but without the 'smart' piece.

I clapped at many things he said - speaking against Islamaphobia, Xenophobia, etc.  I applauded at him taking aim at the "family values" candidates limiting what a woman could and could not do with her body, but not pay for family leave or working a living wage, let alone one that was only $0.79 on the dollar.

Actually, the loudest noise from the audience were more on women's issues than any other.

I found it harder to put my hands together on the banking issues. And they are huge issues. I just don't know where or how, Sanders or anyone else as President, reigns those in. Does he sick the DOJ on them? And with what teeth? Legislation has been written (mostly by the banks) to make everything they do legal. Yes, he said he'd do something, but not what that something is.

And this isn't an issue I only have with Sanders - but with all. How do you sell people your ideas with details - let alone this early in the game? Yet some of the candidates (Sanders included), have to give details now or they won't be in the game three months down the road.

Still - Sanders spoke frankly of racism in this country. Ditto with education, drug laws and prisons. And he didn't let current or past democrats off the hook for some of these issues.

Granted, he got some cheap applause at GWB. And of course he is / was a douche, but we are eight years out on that. Yes, Shrub made many of the messes we are in today, but we've also come a long way since his years of terror. Let's focus on the future, was my thought.

The joke is, many (most?) in attendance couldn't have voted for GWB, as they were in fucking grade school then. And many (most?) probably didn't vote in the 2012 Presidential election either - but more due to apathy.

It was a young crowd. Bernie is capturing those, but I hope it's enough to get them out to the polls - be it for him or another good candidate, assuming he cannot sustain momentum.

He also got what I could call cheap applause on the GOP candidates not wanting same-sex marriage.

Is this really still a talking point? I don't even think the viable GOP candidates are talking about attempting a repeal of this. Notice, I said "viable" candidates.

And naturally, I have to wonder / worry if this is Sanders' demographic when it comes to "likely voter" 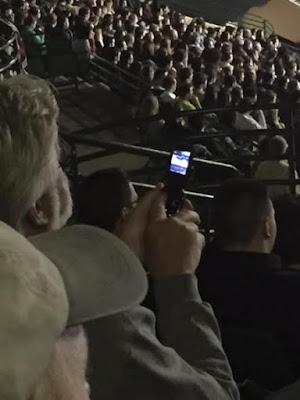 Videoing on a flip-phone?  Adele, he's not.

Ideally, Bernie is my choice for a candidate.  Realistically, I'm not sure he'll get that chance.

I too am supporting bernie. but how is this going to play out for another 9 months?

my boss despises my "bernie 2016" bumper sticker; I think he likes the rump (both of them are idiots).

He attracted quite a crowd here in Boston a few months ago too. I don't think he has a snowball's chance in hell to win the nomination, but I like how he is influencing the narrative.

I am most likely going to vote for him in the primary but I will fully support Hillary if she gets the nomination.

There is no State of Ohio University?