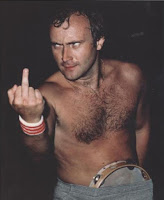 Millions have suffered due to these.

These are things that the United Nations deals with on a daily basis. Some more successfully than others. All are just crimes against humanity!

I don't think it's unreasonable for Phil Collins to stay in retirement...................forever.  (and if you think I'm hyperlinking his name - you are saaaaaadly mistaken!)

Haven't we had a lifetime of marginal to shitty music from him?

The question is rhetorical, of course.

Collins helped drive Genesis to the center. He helped define MTV. He has his Grammys and his undeserved Oscar. He did enough over-the-top drumming with Frieda and his solo work to last a lifetime.

Now he's threatening EVERYONE on the planet, with the prospect of coming out of retirement to tour and record. That is worse than all the genocides on the earth......EVER!

Though somewhere, Philip Bailey is probably happy for a potential duet.

I don't know where his outlet would even be to get played or noticed. Hence his big announcement. In reality, he could have come out of retirement years ago no one even noticed.

I'm going with the latter.

Due to disabilities, he can't even drum anymore, so now we just have to endure the scrodling that is his "singing".

Here is where you come in - and my Site of the Month.

Honestly, I could not stop laughing. The United frickin' Nations.  Perfect.

My problem with this?  Whomever created this is only asking for 5,000 signatures. Clearly, they could have gotten 100 times this many, no?

Ok - and while I know, and I think you know, the U.N. petition is / was a joke, clearly others did not. The person who started the drive actually had to post a disclaimer. 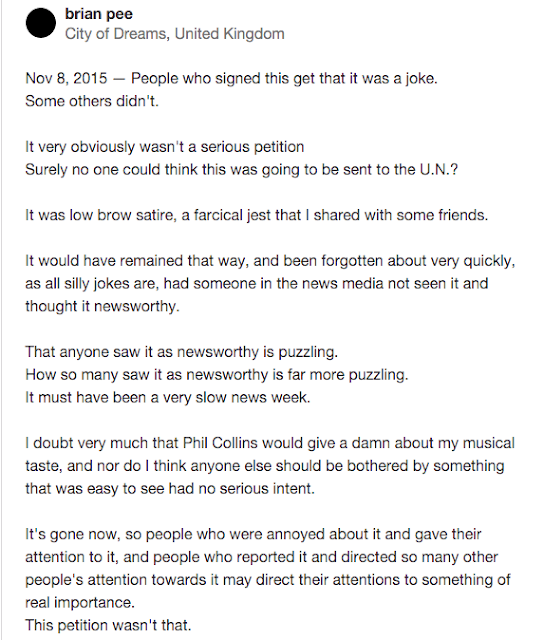