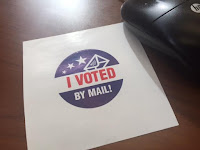 The plan was to write a winning the World Series post.....but that's not happening. I know this and it's only the 4th inning as I draft this.

So I guess I'll go with a post I was going to do later in the week.

A month or two ago, I posted a pic of what I called 'the second most important piece of mail I'd ever received'.  Someone left a comment - 'what's the first?'.

Now, I waffled on mailing it in. I could have gone to Early Voting, or dropped it off in person. There are factions out there saying that the mail service is throwing away ballots for (t)Rump.

Ballots are double enveloped and have no demarcation for any candidate. But you know, you yell "FIRE" and then the people are off....and there's no stopping them.

I also felt better that while not certified / registered mail, they do send email notification when the Board of Elections receives your ballot. And they did. 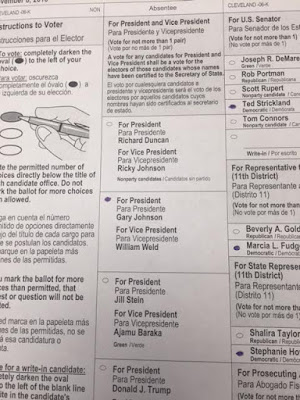 This a copy of my ballot before I actually completed it. I did it for a joke that I'm sure I'll use somewhere in the next few days to torture certain folks who will have a hemorrhage before I get to say "kidding!"

FUCK YEAH! wish I could early vote, but this fucking backward state can't be arsed.

Virginia makes early voting a real pain, I will go stand in line on Tuesday.

One more game and six more days. This too shall pass.