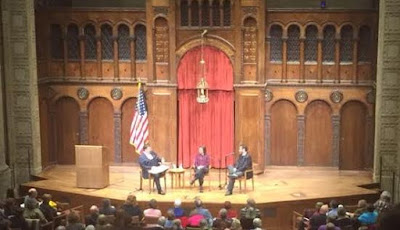 Last night I took 710 and two of our friends to a lecture series.

The topic was Lincoln. As in Abraham, not the car.

I've been to a few on this - most notably by Doris Kearns Goodwin, who wrote Team of Rivals on Lincoln....and became the model for Spielberg's film, Lincoln.

That screenplay was written by Tony Kushner, who was one of the speakers. The other was Sarah Vowell.

Kushner is probably better known for writing Angels in America. Vowell, while an accomplished writer and contributor to This American Life, is probably best known for being the voice of Violet Parr in the Incredibles.

But Vowell did write Assassination Vacation - about visiting presidential locations of former presidents who were killed in office and conveying it in a humourous but relatable perspective.

Vowell usually appears with the likes of David Sedaris, another This American Life contributor. So the pairing of her and Kushner was too hard to say 'no' to.

While both are writers - clearly - they are just as much historians. The depth of their knowledge on Lincoln, down to almost every one of his speeches was astounding. They knew his cabinet, his detractors, his travels and family relationships. Kushner did more than just translate Goodwin's book into a movie.

Vowell had great humour and injected some facts with fun - and her delivery was great.

As you'd expect / suspect there were tie-ins to the current political climate - and how the GOP claims to be the party of Lincoln. As if.

They discussed how people complained there are/were no good candidates anymore, when in reality, the ones we saw were on par with most and there have only been a few stand-outs.

But Vowell and Kushner both mentioned Lincoln's Lyceum speech, where Abe himself foretold that a tyrant would overtake the American political system from within.

It was a very enjoyable 90 minutes....and could have gone on another 90.

I don't think they 'tour' together, as this was the first time they'd been on stage at the same time, but if they do, you should see them. It was a great evening.

Song by: Capital Cities
Posted by Blobby at 12:06 AM