the Thanks I Get 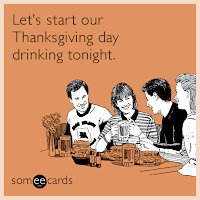 Allegedly, yesterday traditionally is the heaviest drinking day of the year.

Naturally, I am skeptical, as I saw no data. If there isn't a spreadsheet with a pivot table, I'm basically calling you a liar.

On the hypothetical - of course it could be the heaviest alcohol consumption day, or at least in the top 5.

Fuck - if I had to deal with travel, be it airports or on the road, to head to family and a sub par meal experience, I'd be tipping back a few myself.

As it is, the farthest I have to travel is to my mothers, 40 minutes away.

The plan was to go to 710's hometown to have dinner with his father, but that got changed, so now we will be in town.  Sigh.

I was kind of hoping to go away, not that I wanted Shep to go to a kennel again. There are hotels that allow dogs, but I don't think you can leave them in the room unattended while you're out to dinner. And right now, Shep barks for a bit when we leave.

The entire family won't be at my mother's......thank Yahweh.....as I just can't deal with most of them, especially post-election.

Oh yes, make no mistake, I can guarantee that at least two of my sisters and their husbands voted for Tweedle Dump. That's just the icing on the cake of wanting to avoid them. I half think (ok, three-quarters) they bailed on my mother's (one which has never done that), as plans for avoiding me.

I can only say, she beat me to the punch, because going to the father-in-laws was my plan to avoid her.

The big takeaway though is my nephew will be home since the first time he moved away last February. I'm a little excited to see him. I am very excited for him to meet Shep.

Oh, and my uncle who turned 96 (!!!!) yesterday will be there.  I suppose that's another reason to drink. Maybe not for him, as it could kill him.

I'll be chauffeuring a pooch to and fro from Nana's house tomorrow, so there will be little drinking for me. He's our 'precious cargo on board' , so I'll remain sober and stick to like two glasses of wine early on in the evening.

So starting today, it's a four-day weekend. Shopping is out of the question, but would one or two movies be?  I'm hoping not.

In reality, we will probably do the last of our leaves.


Anyways - I hope you all enjoy your Thanksgiving, however (or if) you celebrate. Don't overdo it....on food. It's really quite bland, so save it for something good.

Happy T-Day! Probably more fun (and relaxing) to be home with Shep for the weekend. And avoiding right-wing family members is a good rule any time, but especially this year, and it's one rule that I follow. It helps to live multiple thousands of miles away from them. I'll drink to that!

spouse and I are going to a japanese sushi/seafood restaurant for dinner today (BYOB).

we too will be doing house chores this weekend; no shopping, no movies, no fucking family drama llamas. just us and the cats. a better time for all!

holiday greetings to all at your house!

Happy Thanksgiving! Just the two of us in peace this year. I will add that to my list of things I am thankful for.

At my house it will be 19 of the in-laws (all Mexican) and me. The only reason I point out the heritage is that politically we all get along, especially now. Tomorrow at 5 am I'll be in line at Home Depot! Black Friday isn't as much fun since stores started opening on Thursday so I go the the ones who wait for Friday.

Happy Thanksgiving.
I have already started my drinking .....

I am thankful for having you as a blogger buddy.

Spent Thanksgiving with our new friends, who it came out voted for Trump! So we were silent for a few minutes after figuring out we had opposite political views, and then we ate pie and children ran around screaming and I resigned myself to not changing their minds and it's fucking Thanksgiving so let's be grateful, right? I can only control my own behavior.

Happy Thanksgiving. I hope it all came off as planned.