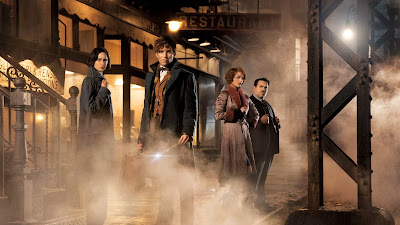 We are on the road to 25 - though I suspect I might have wasted an opportunity with Fantastic Beasts and Where to Find Them - the offshoot of the Harry Potter series.

I had little idea of what to expect, which isn't necessarily a bad thing

I am about 63% sure the movie wasn't meant to be a commentary today's U.S. political climate, but you never know.

Even the President of Magic (the U.S. doesn't have ministries) is female. I guess that was wishful thinking on J.K. Rowling's part. And she's black. Man, Rowling must love jabbing the alt-right.

With a very general overview - a Hogwarts schooled wizard makes it to the U.S. (New York City, specifically), and encounters issues with the U.S. wizarding world. This is set in the late 1920s, decades before James and Lily Potter would bite it in Godric's Hollow.

Save a character name or two, there is little to no crossover to Harry Potter, though clearly the distance a wizard can appirate is a very limited - as Newt Scamander (Eddie Redmayne) takes a steam ship across the Atlantic.

While I've since read reviews since seeing the movie two days ago, not one seems to mention the not so underlying tones of communism and / or the House investigation to unAmerican activities? The irony being that Arthur Miller covered this with a story about witches as the analogy - and here we are at a witch movie covering it again, though Miller did it much much better.

And I do say 'underlying' as the story itself is not the strongest. It seems the movie is built around special effects with a story sewed in between. While we have opted to stop seeing 3-D movies, as most of them are just not worth it - this one was 3-D (based on the timing of going) and it was not worth it.

The acting is stiff - at best. I'm a little over Redmayne's Autism Spectrum Acting Method. There is only so much non-eye contact, heavy blinking, stammering and sheepish delivery one can do and call it 'craft'. I did find it fascinating that Queenie, one of the witches, looks very very similar to Redmayne's "Lili" in the Danish Girl.

The main auror in the story, Tina Goldstein (the wizarding world's first Jew!) is played by a lesser man's Maura Tirney. The resemblence was eerie, but there was no depth to her character, or at least she brought none. But that's true of most everyone. The witching president couldn't have been more wooden if she'd been Pinocchio.

In what world is it possible I'd see two movies in a calendar year with Colin Farrell? I will say, he dresses up nice, but his performance was flat too. He had much more range in the Lobster - and he was a beaten down man for most of that. But he's sure nice to look at.

There were two stand-outs (at least for me), Dan Fogler's Kowalski was done well and he pretty much made the movie. The unexpected performance was from woman who played Queenie. She was part Ann Margrock, part Marilyn Monroe. I guess she was more Ginger from Gilligan but with a wholesome sluttiness, unlike that island tease! But where her character could have been annoying, she was very enchanting.

I had wanted to see the movie, and I'm glad I experienced it. The creative team is the one behind the last four Harry Potter films, so the visually there are a lot of similarities.

My understanding is that Fantastic Beasts came from a 180 page story Rowling wrote.....and from said story, they are to eke out two more movies!!!!!  EEEEK.

Perhaps this was just the set-up for better things. It would almost have to be.

I haven't checked on how it's doing at the box office, but if our showing was any indication.....yikes. We had six others in the theater with us. Our showing didn't even pay the minimum wage salaries for the ticket dispensing chick, the two folks behind the counter, or the person to press 'play' to get the movie to start.

Visually, the film was well done, but substance-wise? Meh. They're gonna have to try a lot harder next time......and apparently, the time after that.

I was wondering about this one

I haven't even heard of it till now.

I'm with you on Ben Fogler - though Farrell was wasted, something we do NOT want to see!