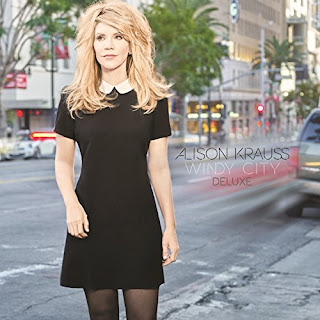 Cover albums are a risky gamble. I've said it before in other reviews. g-d help me, I know I'll say it again in the future. And while I love Alison Krauss, her talent doesn't make her any less susceptible to "covers failure".

Windy City is her new album (sans Union Station - though three of the four members make an appearance).

Krauss' voice is perfect - even though the album took three years to make, due to throat ailments. The arrangements are good, as is the instrumentation / orchestration.

So then why is most of this album boring as fuck?

Krauss mixes lesser known (or not known at all) songs with a few better known ones. That's a plus. I always feel if you do songs that are too popular, you're setting yourself up to fail by comparison. And don't get me wrong - here and there she does too.

The disk starts strong with "Losing You" - it's well done from start to finish. "It's Goodbye and So-Long to You" would have been better as a k.d. lang Shadowland song, than here, minus the New Orleans vibe that it ends up being. It seems a lot longer than 3:11.

I am a big fan of Krauss' take on "I Never Cared for You". I was never a fan of Willie Nelson's version, but this one truly works....and works well. And I am digging "Alone Am I".  Simple and clean.  The problem is, that it follows a few songs that are just mundane and by that point, boredom is setting in.

As it goes with the more popularly known songs, is anyone going to sing "Gentle on My Mind" better than Glenn Campbell?  It get it's a different arrangement and execution, but it doesn't work.

And honestly, does anyone in the world needs another cover of "You Don't Know Me"?

The surprise isn't that Krauss covers it, it's that she took so long to do so. Every other established Nashville artist checks that song off their list early on in their career - almost like it's a mandate. No offense to Krauss, but she brings nothing new to it - and how could she when the song has been recorded 4,491 times?

Krauss gets points for trying something somewhat new (even if it's old), but in the big picture it doesn't gel with me. There are selections here and there, but as a unit, it is not all that cohesive.

And not that I'm looking for Windy City to be extended, but when Krauss' last solo disk is 17 years old, and her last Union Station disk is six years old - you kind of expect more than 34 minutes.

Alison Krauss has created high standards with her past works - and that can be hard to live up to. While she tries valiantly, ultimately, the song choices don't get her there. Not this time.
Posted by Blobby at 12:03 AM

I'm enjoying it the more I listen to it. And, imho, her cover of "Gentle On My Mind" is better than Glen Campbell's. I also picked up, and am enjoying Tift Merritt's "Stitch of The World". With your expansive music knowledge, you are probably already aware of her but she's new to me.