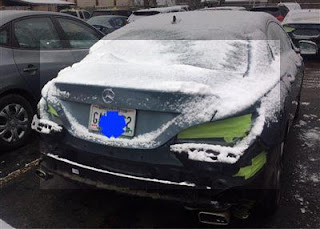 I am finally getting around having my car fixed from the crash-bang-boom that happened two months ago.

I was lazy and didn't jump right on it. The car was all very driveable, so why rush it?

I don't think it helped that I only somewhat like my car. It was great for a test drive, but the more I live with it, the more I think "meh".  ....and it's not great in snow.

The collision place had to provide the rental. It is 4-5 days, so what do I really care? It's taking me to work and back........and that's it. You're talking to a guy who with work travel, has rented hundreds of cars. There is no thrill. And as it turns out, they all use the same rancid-smelling cleaning solution between each customer.

As they wrapped up the paperwork, the guy goes, "you have your choice of a Santa Fe....a Mini Cooper or a....." 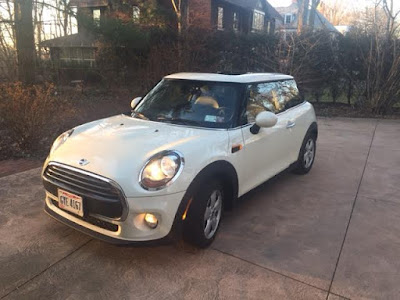 I don't know why all the excitement from me, other than it was one of the few cars I haven't driven and kind of always wanted to.

Winnie - I named it Winnie, as in Winnie Cooper - has some pep. But I'm not a fan overall. It's loud, the sound system isn't intuitive and it smells. So much so, that in 30 degree temps, I drive with the window down.

That said: it's new and different. It has power and tons of headroom. Oddly enough, I don't have that in the Benz.

Well, it's cute as a button. Maybe a little febreeze will help the smell.

The backseat of your Benz was designed for people under 4'.

I absolutely refuse to drive a car that I have to wear, but that's just me.
Deedles

I ain't never rented no Mini Cooper and I rent cars all the time due to my travels, I'd get excepted about that too. Talk about smell I usually rent them in Florida, take yor mind there for a second...
As far as owning a Benz. I owned one once. Key word once. Meh is an accurate description.