Pull Up to the Bumper 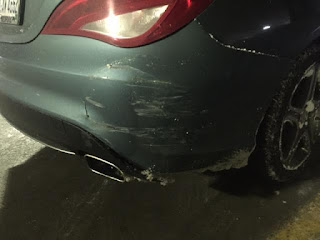 Maybe this just the way to end the year.

Yesterday we had our first big storm. I had gone to bed at 23:00 the night before with not one flake fallen.

I woke at 04:15 not being able to see a thing out the window. As it turns out there was already 6" on the ground and it was still coming down and heavily.

I love snows like that - - when I don't have to go out anywhere. But alas, I did.

While I don't work far from work, there was no walking this one, though I probably should have.

Work crews cleared the major street somewhat after 05:00, and every school, community center, and church activity was cancelled by 05:30, so the roads were somewhat clear because everyone was trying to figure out to do with their kids and such.

Really it was not the snow that kept me from walking, it was the subzero temps that were the problem. The wind was just brutal.

I made the decision to take the 'safe' route in. The preferred way has a much steeper hill that is a down slope. That's not such a big deal, except that at the bottom, people park their cars on the curve right before a light. It's just a recipe for disaster. And that road, I can guarantee was not plowed - which probably its saving grace.

I find the semi-plowed roads to be much more slick and dangerous.

So, I went a different route. Slight hill, but nothing major. And a cross-through street that can be heavily traveled, which I thought to be a good idea. I did consider a longer route that would be a more flat, heavily traveled way, but figured - 'nah - it's early (06:35), no one will be out'.

My real thought was to work from home, but assumed many people would call in so someone would have to be there.  Ironically, not one person called in. They were late, but they were there.

Still - I made the turn onto the cut through and there was about 300 feet of stopped cars. The light sequence sucks, along with the weather. No biggie. And I was smart enough to stop a good car length away from the car ahead of me.

I listened in driver's ed.

Apparently the guy behind me did not.

I'm sitting there, minding my own business, and not looking in the rearview mirror - because, why would I need to at a stand-still?

The putz rams right into me. Sonofabitch!

It looks like I will be getting estimates on a new bumper.

Ouch, no one hurt, I hope the other driver has good insurance. I had that happen one morning a couple of years ago, on a clear dry Sunday morning. About $1,000, to replace the bumper cover.

Sorry 'bout the bumper baby,
But thanks for drivin' that song in between my ears for the day,
I love me some Grace.

Well, that sure sucks! Next time, work from home.