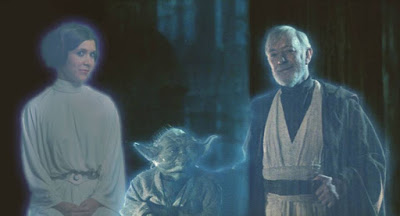 As a gay geek with a blog, it seems I am contractually obligated to comment on Carrie Fisher.

I guess for me, the surprise isn't in the news that she had died, it is that folks claimed her to be alive and stable post heart attack.

Working in a hospital, you see a lot. Do-gooders might have used that AED to revive Fisher on that plane, but I can't imagine she was alive. Just my $0.02.

Of course, 'stable' means very little. She might not have gotten any worse (well, I mean, at the time), but she wasn't continuing to crash.

That said - she was kind of a marvel.

Let's face it, if we're truly being honest, Carrie could barely act her way out of a paper bag, yet we loved her in spite of it....or maybe for it.

My mother still will attest that she is the only good thing in the Blues Brothers. She just loves Fisher's performance in that. For her so-so performance in When Harry Met Sally, I still found her to be a highlight. And she was passable in Hannah & Her Sisters (though how Dianne Wiest's character \ dealt with Fisher's character in her screenplay within a movie is hilarious).

What she excelled at was writing....and talking......and bringing crazy out to where it isn't taboo.

For writing - it was books, or screenplays, plays or script doctoring. I loved the movie Postcards from the Edge. Sure, Streep was great. Yes, Mike Nichols did a great job directing, but it was Fisher's book-to-screenplay that made it all work.  That and her life, which it wasn't so loosely based upon.

Fisher was great in interviews. She was quick, she was funny, she was usually spot on. Her HBO special, Wishful Drinking, was just fun to watch, though it had it's shards of heartbreak. You can make fun of past relationships, but the demise of those is never fun - so you have to make it funny. Or try to.

Carrie was the queen of guest shots. If she got union scale for them, she still could have been wealthy. Family Guy, 30 Rock, Big Bang Theory, Sex and the City  - I'm sure there are a thousand more I never caught.

Yet it's been Fisher's up frontness (it's a word!), with being bi-polar that has been great. I'm sure at one point she tried to hide it, as that is the natural reaction. But at some point, she gave up the ghost and became the unofficial spokesperson for mental health.

She discussed the struggles on and off medication. That she happened to be in two top 10 movies of all times, gave her a cashe that you can't get from a no-name on a TedTalk. When Princess Leia talks, people listen.

Honestly, my first thought when I heard she had a heart attack on a flight from London was, "oh - I hope she finished her scenes from Episode VIII".  Regardless of how that story arc turns out for her - assuming she survives that storyline - whatever they planned for Episode IX will most likely have to change.


And yes, most the interwebs first thought was "Fuck You 2016 - not ANOTHER one".

I haven't done a comparison - as if one really could - to see if there are more or less 'celebrity' deaths than other times. But here's what I think it is:

We are now older and this is no longer our parent's generation of entertainers dying off where we go, "oh, I've heard of him" or peripherally know their work. No, these are the artists with which we grew up - the ones that made impacts on our lives or have some kind of cultural connection.

And if we want to get right down to why it sucks so much is: these 2016 deaths we've experience, the folks are not that much (if any) older than we are right now. That probably scares the fuck out of more than a few of us. Not me, as I've always been a fatalist, but I get the reaction.

Here's what really sucks - it's only going to see worse as we go along into 2017 and beyond.

She was also a great writing talent, I loved her work.
JP

I'll miss Carrie. An aquaintence (our age) jokingly remarked (in poor taste) at dinner Tuesday eve that he couldn't believe the hubbub as he had heard her referred to as "Star Wars Royalty", I corrected him (possibly also in poor taste) and pointed out that she actually, technically was.
I will really miss her mother.

I agree with you about Carrie's talents and contributions. You are also spot on about the celebrity deaths striking a chord.

My friend said he was only surprised Carrie Fisher's heart lasted as long as it did considering all the blow she admits to doing. Never really thought about it in that context but still found the news of her death and many others very sad.