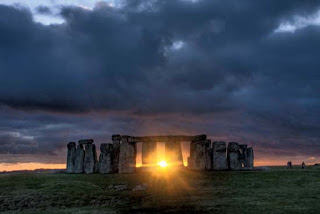 I should be walking Shep when it occurs.

It is one of these days that always makes of my father. He'd be the first to say, "days get longer from here".

Which of course was true. But he's ruin summer by saying around June 21st "days get shorter from here.".

Right now, it's nice to know there will be a little more sunlight. So far, the early and late darkness haven't bothered me that much. Maybe it is because I'm not at home - either working or not. I'm at the office before sun-up and until lately, I've been at home before sundown.  Until a little bit ago, that was doable, but not it's dark no matter how early I try to leave.

All Shep walks during the week are in the dark. He doesn't seem to mind.

As days get longer, maybe the sun will come up to warm shit up. Yesterday we made it up to 30.  Yes, up to. The evening dog walk was not bad, but there is ice everywhere. It's a deathtrap.

Ok.....maybe not death, but it's a broken hip waiting to happen. Even poor Shep has tumbled on the ice. Usually the low center of gravity dogs don't do that.

But as the darkness goes - in the evening this week, Venus is out.....and brighter than fuck. It is quite amazing to see given the chance. I mean, it shines through even the thick clouds.

I don't know if it is viewable everywhere, but in the eastern part of the U.S. it's quite the sight to see.

Yes Venus has been putting on quite a show out here as well.
Happy Solstice!

I'm happy that my boys don't want to walk when its cold. Hell, I can barely get them to do their 'business' outside when its cold. The darkness doesn't bother them though, unless Walter sees make-believe threats.