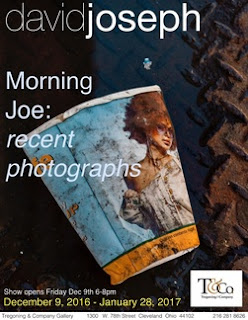 Tonight is my cousin David's opening for his art show.

He's already had successful shows in New York and Boston. Now it's time to bring it on home.

I am a fan of the work - and not just because he's family or a friend. He also has a good eye.  You'd actually like to see that more in artists, but I fear most only think they have a good eye - regardless of their medium.

So, assuming weather cooperates - as temps plunged here and there are snow advisories everywhere - I think David will have a good turn out.

Mind you, he has already secured his own minyan. The cousins are congregating - Scottsdale, Portland, Los Angeles, New York...and Cleveland are all represented.

I'm very excited by this.

The weekend is planned. Dinners, yoga, possible brunch.....and however much we can stand each other while the out-of-towners want to do non-family things. And rightfully so. They don't get back here a lot.

Maybe I'll be able to lose this bandage on my head before I see them tomorrow evening for art, drink and food.

Oh yes, the bandage from last week is still there. At least until Monday.

Let me rephrase:  the suture is there until Monday. The bandage might go before that - like today. But then some moron (me) accidentally took the sutures out last Monday. And so, last Monday afternoon I was back in the doc's office while he sewed me back up. He asked if i wanted numb, but I declined. It wasn't horrible. But he triple secured it with multiple layers of bandages.....of which I'm down to one.

I know I'm vain (hey, I went to a plastic surgeon) but I'm not going to have pictures of me with my cousins with white steri-strips plastered in the center of my forehead.

naughty boy! you need a cone of shame!

I have to ask: how does one "accidentally" take stitches out?