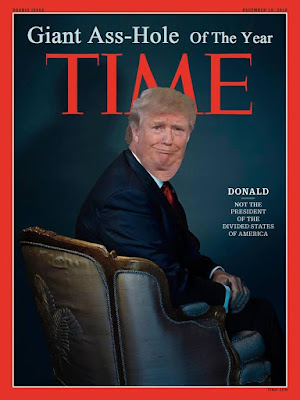 ....and I'm not even talking about the new Medea xmas movie.

Dump voters have to be the dumbest fucks on the face of the earth. Their bigger problem?  They just don't know it yet.

Let's forget {well kind of} that our current Secretary of Energy is a nuclear physicist and that the incoming {barring Senate approval} one couldn't remember the department's name.

Let's overlook the potential Secretary of Labor heads a fast food chain to which I know no one who has ever eaten there - - and makes his workers stand over hot fryers for like $5.25 an hour with no overtime. ....and now and again they have urinal cake duty too.  So for all those voters who thought Dump was bringing back 'their' jobs - he is....and it's at Hardee's / Carl's Jr.

Good luck with that.

Oh yeah - and there's all that Russia stuff.

I'm not in the least bit surprised at the potential election assistance. But yes, if the Dump folk think non-incriminating emails were a felony and completely indefensible, in theory shouldn't they be super outraged at this?

And then there is Exxon Mobil's CEO who might be Secretary of State who is a long time friend of Putin. It's shady at best.

There is so much to be frightened by an administration that has not even yet been sworn-in.

One can say all they want about the new organizations out there - be it the 24-hour "news" channels, print (ha!), or even the shit like Breitbart. None of them tell the entire trust. Some of them don't tell any of it. Some are in it just for the ratings and the news / truth mean little to nothing. But it's there - and it has potential.

Reinhold Priebus is saying that White House press briefings  - or as he called it 'this boring topic'.

Yes - he's burying the freedom of information into a 'tradition' that might no longer need to exist.

As much as any administration has tried control the media - image trying to freeze it out and to only put forth the news that Dump would deem to see fit.

Mind you - his followers will think it's the best thing since toilet paper (honestly - who the fuck thinks sliced bread is so terrific?). They hate what they think is the liberal press (which again, it is so not, or they'd have held Dump to any answer for any question they never actually asked in the first place).

Song by: Better than Ezra
Posted by Blobby at 12:07 AM