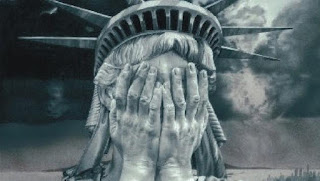 Having a different outcome was like the chance of winning the PowerBall, MegaMillions and getting an ABBA reunion all on the same day.

......yet......somewhere one (i.e. me!) deep deep down in the recesses of my very being, I was just as hopeful to see Dump lose the Electoral College as I would be to win both those lottos and seeing a band that would never get back together, actually reunite.

Alas, none of it was meant to be.

I'm not surprised......still disappointed, but I feel that will resonate with me for the next few years.

Coincidentally, or not, I left work a little early to join three women I used to work with for drinks. We do it every few months - and it's always fun.

It's quite sad - I'm an easy drunk now.  That was never the case. Two beers before dinner. And I was tipsy. Not drunk.  Though two men (well four) came into the place with whom I used to do business. Mind you - it is pushing a decade, but I didn't recognize the one when he came up to me.  I felt bad.

I noticed his wedding ring was gone. I only remember because he went to Vegas one weekend and back to work on Monday as a married man. Do those spur of the moment marriages ever last?

I shook their hands on the way out of the lounge. Before I got home, I had a LinkedIn request from Scott.   Oooooooh.

And while Dump is "official" in his run for office, it's like 18 degrees here.  I don't live in Hell, but it's a few hundred miles north in Michigan.......so apparently it has frozen over too.

this country sucks. idiots are running the asylum. NOT MY PRESIDENT!