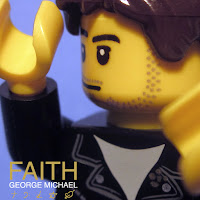 As a gay man with a blog, it seems I am contractually obligated to comment on George Michael.

I remember seeing him when at Trilogy - a three story bar in Columbus, and oddly enough, not a gay one.

Well, I saw WhamUK's (which is what they were called before they were just Wham!). I was with a bunch of straight white boys, and when either "Young Guns" or "Bad Boys" (I now can't remember) came on, no one knew what to say.

The thing was so borderline homoerotic, it was uncomfortable for all - and at the time, they didn't know I liked guys. Oddly enough, it wasn't Michael that I found the attractive one - it was Andrew (pre-nose job).  I bought the record the next day (if nothing else than for their cover of the Miracles' "Love Machine")

But I have to say, their second album, which I never purchased (nor their third), might have been good, but I couldn't get past "Wake Me Up Before You Go Go". I just couldn't. The music was bad enough - but George's make-over:  highlights, whitened teeth, tan skin, neon clothing. It went from homoerotic to just plain homo.

I chuckled over the girls who loved him. I was thinking even Louis Braille knew this guy was queer. And trust me, it wasn't wishful thinking.

Whatever you think (sorry - thought) about George Michael when he worked a song, he could make it great. The problem used to be for me - and it carried over long after - was that he cared more about the pop hit than the song. I mean, does anyone think that "I Want Your Sex" was a great song?  Or "Club Tropicana"?

The answer is rhetorical.

In his song "Freedom" he at least recognized his strike while it's hot mentality in his lyric:  "when I knew which side my bread was buttered / I took the knife as well"

His commercial problem started with the end of that song: it was basically his sign off that he'd no longer cater to that MTV faction. It was here I actually went back to purchasing my first George Michael album.

Maybe it was the music, maybe it was his public circumstances, maybe it is a pop star's life span or maybe it was all coincidence, but it was a this point his music became interesting to me. But his releases were fewer, and had less radio-friendly songs, regardless of how good they were. He hadn't had an album of original material for 12 years.

Four + years ago, I had Mr Michael as a My Music Monday selection. A live version of an Elton John song that to me is just a stand out.

Ironically enough, I heard a song of his the other day and thought, "I wonder what he's doing these days".  That question was answered two days later while sitting in a Chinese restaurant with 710, David and his wife.

So, we say goodbye to another one this year.

I also thought Andrew was the cute one; go figure.

"Careless Whisper" and "Kissing a Fool" were among my favorites, and I sing them both at karaoke from time to time.