"What's that bindi on your head?"

From most people, I'd have been aghast, or faux-aghast. But it was Becky, so I just shrugged.  It was an hour after she arrived, so she actually got points for waiting so long to form the question.

I find it hard to believe with the pictures I post that since March or April you folks have not noticed it too.  It's right there to your left.........see?  You've been awfully nice not to point it out - - - unlike some people.

Honestly, the bump appeared overnight. Or almost so.

I don't see it in Georty's wedding reception pictures in March, but do see it in some April ones.

Now, I'm not saying same-sex marriage - specifically Georty's - is a sin against nature and manifested itself in some hideous boil on the center of my forehead. But I'm not not saying it either.

Sure I partook from the open bar maybe more than I should have, but is that a reason to smite me?

So, after having to see myself in the mirror every fucking day with this on my head, I finally caved and went to a dermatologist.  While he would not take 'no' for an answer on a mole check (I'm fine there), he finally did look at the my head.....he determined it was a cyst or lipoma.  Yes, he could remove it but there'd be a scar.

I asked if he could make the scar into the shape of a lightening bolt - he never looked up from my chart and just deadpanned, "yeah.....that'd be great".

I don't think he meant it.

Anyhoo.....he said while he could do it, he suggest a plastic surgeon who could do much better with the incision / scar.

If the Real Housewives of Beverly Hills are any indication, it won't be my last. They make it sound great and very addicting!

The nurses and doctor were great.....though I barely got much more reaction from my lightening bolt comment to this doc as I did from the last.  "I only do straight lines".   Buzzkill.

I won't say he tried to talk me out of it, but he kept mentioning there'd be a scar. Chicks dig scars....and it had to be better than looking at Io orbiting this fucking planet called my head. I may have left out the adjective.

Doc cam back to numb me up. All in all it was probably 15-16 injections to part of my forehead. Only three hurt, but fuck did they hurt. But I took it like a man.  They left me alone for 20 minutes for the injections to take full effect.  And if I thought the mass looked bad before, the shots made it angry. 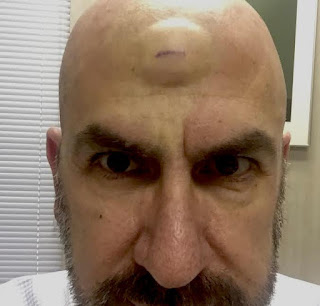 A few minutes later I was back in the procedure room.

I wasn't able to take pics in there - because you know I would - mostly because I was in the chair, reclined with sterile dressing all over my face, including my eyes, and it also covered my shirt pocket where I kept my phone.

The doc asked what kind of music I wanted to hear. He did laugh when I said, "anything but hard-core rap or speed metal".  I honestly didn't care. I wanted him to like the music. He was the one with the scalpel.

I felt no pain, but could feel pressure and tugging. I thought the doc would talk about what he was doing, but he didn't. Now and then I'd feel him dab my brow, but I fear he was just cleaning up blood. Soon enough - 10 minutes? - I surmised he was suturing my head. I couldn't feel it.

I axed what it was, and he thought it was a lipoma, but it would be biopsied. I asked, still under the sterile dressing, for what it might be biopsied and he hesitated. I am the one who said tumor and then told him the quick tale of me going in for my appendix and coming out with bone cancer - so I was fine with hearing the worse case scenario.  He was quick to tell me it was most likely not a tumor as by my own admission the thing remained the same size for the last six months.

He dutifully ignored my suggestion of taping a 4x4 gauze pad to my head with blood soaking through it so I could go into the lobby that way. He put a flesh coloured steri-strip and I said, well at least now I can say, "you should see the other guy!"

I'm sure there will be a knee slap and chortle in there while I deliver that line.

I learned how to wash and stuff. Really I just wait to have the suture removed in a week or so, but the bandage should stay on, but I feel it's going to look ratty in a week's time. 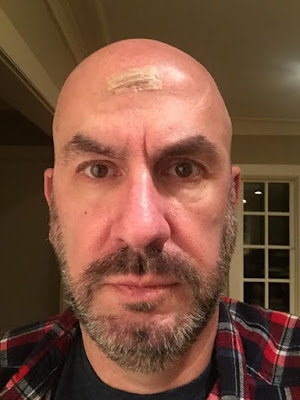 710 came home and it took him 20 minutes to notice I even had it done. Maybe he's just not that observant.

The doc and I talked about swelling, but I didn't think to ask about pain.

TTTT, I never noticed the bump. but cripes, that pre-incision photo! and the MDs had no sense of humor about the lightning bolt!

I would have TOTALLY insisted on the Lightning-shaped scar! Winguardium LeviOsa!

Smart to get that taken care of though. Almost always benign, except when they are not.

I have one of those on the back of my head. Drives me crazy. I would have asked if I could take it home in a jar.