We Learned the Sea 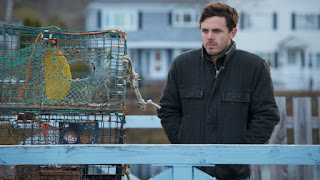 710 said after seeing Manchester by the Sea: "well, Casey Affleck is certainly can run rings around his brother's acting".

He laughed immediately after wards, because even in a dark car, he could feel my eyes go into a 'no shit, but who can't?' roll.

Yes, Ben has two Oscars, but one is for writing, one for best picture (which is production...not directing). He has zero Oscars for acting.

And yes, Ben has it over Casey in the looks department, but not in the acting one.

Anyway, by the sound of it, Manchester by the Sea is / was supposed to be the Feel Bad Movie of the Year®, and it well might be.  That said, I think my preconceived notions on how sad it might be were so elevated, that after wards I internally went, "well that wasn't so bad".

Make no mistake, there is little 'up' about this movie. It is a tale of a man trying to find his way through multiple layers of grief. Some you know about, some you learn about.

Around one-third of the movie is told in past sequences, though I'm reluctant to call then 'flashbacks'.

Grief is the central part of Manchester. It deals with family interaction, which entails their grief as well and all the way each individual processes it - though some have encountered more sorrow than others.

Writer and Director, Kenneth Lonergan, tells stories in 4/4 time. Well, this is only this third film and I've only seen one other with You Can Count on Me - which is now 16 years old (how is that possible?). Mark Ruffalo was in that film and just outstanding.....and I kept thinking he should be Affleck's character. In certain ways he was - as there was a vein that ran through "Uncle Lee" that reminded me of Ruffalo.

It would be easy to classify Affleck's acting as 'hanging his head and the ability to almost only use single word dialogue' method, but that's selling him and the story short. And it took to well past the end of the movie for me to really grasp that. With no spoilers - he is haunted, and rightful to be so. As he tells his nephew, "I can't beat it"........and there is not scenario in which he can.

Michelle Williams does a nice job in the few scenes with which she appears. Matthew Broderick makes his third appearance in a Lonergan film (3 out of 3), in a part that while not a complete throw-away adds extremely little to the story. Had Lonergan developed more of religion into storyline - which could have been natural given some of the circumstances - it might have fit into the movie, but I think it was there just to give something for Broderick to do.

Kyle Chandler does well - but when doesn't he? The kid who plays his son does a nice job. While you think he'd have more emotional needs and neediness than is portrayed, I have to remember it's a 16-yo boy. If he emoted more than most of his age, the movie; the story, would be dishonest.

There are no tidy endings here either, though I wasn't expecting them. However, I was expecting a sadder movie, though I suppose that is all relative.

Everyone is saying it is 'the best movie of the year'. I supposed that depends on what scale you use to judge. It is clearly well done - some of the cinematography is just magnificent - it is certainly well written, acted and directed. It's just the tone that makes it tough to say it's a 'good' or 'great' movie.


If you have seen the film (or have no plans to) and want to read an alternate review, I suggest reading one at ChristianAnswers.  There is the main review and then an opposing / even more negative one below it. This was delightful fun for me to read aloud to 710.

This doesn't open here for a couple of weeks yet but there's already a 'buzz' about it, which your review seems to confirm was justified (one way or another). I wanted to see it anyway, and now definitely will. Thanks.

Hmmm, hadn't heard of it but that doesn't mean much as I'm not one to keep up with current film.
The trailer doesn't speak to me other than this film would keep Fearsome busy sopping up tears. Trailers don't often actually do a film justice.