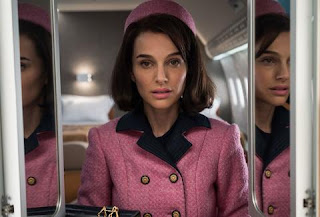 I'll admit, when I heard Nat'lie Portman was going to in a movie about Jacqueline Kennedy - my initial reaction was:  "whaaaaaaat?"

Srysly, she of two (!!) Thor movies (oddly enough, neither of them for which she received her Oscar).

My second reaction was: could Portman even come close to matching (let along topping) the performances of Jaclyn Smith or Katie Holmes Cruise for the same character?

Still, Tony Kushner said we (well, he told the entire audience, not just us) should go see Jackie - that he thought it was the best movie he's seen this year and that Portman did a phenomenal job.

We had lots of film choices this weekend - most of them will be around through end of the year, so I think we can make those too. So off to Jackie it was.

Long time readers of this blog will know of my past obsession fascination with the Kennedy assassination - the Jack one,  not so much the Robert one - so I go in with a more critical eye.

There were some inaccuracies for sure, though nothing major and some things were played way down. And while I'm still enthralled with the subject matter (at least to a degree), I'm stymied by the A+ and 5-star reviews.

It's good and all, but I didn't think it was overwhelmingly great. I can't say Portman is Oscar-worthy for this role (as other are saying), but I don't know she was for Black Swan either - so what do I know?  But the Academy loooooves biopics of dead people, so she has a shot.

It goes to down the voice for me. Jackie Kennedy did not have a great speaking voice and neither does Portman, though the latter is by design. I also found many of the characters to be just unlikeable or just uncomfortable - including Jackie and Bobby. Even Billy Cruddup - whom I normally like - was just passable in an engaging character.

The story jumps around three days (or so). THE three day. The interview Kennedy gave was real - to a degree - and a week or so after Dallas, but most of Jackie focuses on landing at Love Field to burial.

Visually the film was interesting. Some of it looked like archived footage, but then it kind of looked recreated. If the latter, some it was extremely well done, including the deplaning at Love Field. The film technique was true to the home movies and television footage of that time.

If you're looking for a spot-on portrayal, you won't find it here. There are no Boston accents on the John or Bobby Kennedy. As the movie title suggests, these men would be bit players.

I did love the casting of Beth Grant and John Carrol Lynch as Lady Bird and Lyndon Johnson. Peter Sarsgaard has yet to do anything that hasn't creeped me out - and that includes playing Bobby Kennedy, though that man was not the saint and do-gooder people think.

I did have to laugh at our viewing audience. I do believe all were alive when JFK was still breathing - myself included. I do also believe I was the youngest of that era (Kennedy died 3 months after my birth) but most of these seemed closer to Rose Kennedy's graduating class. It was humourous to see iPhone flashlights go on after the movie ended as most of these seniors were looking for things they lost - like their youth and glucosomine.

Alas I know our age difference!
I was born two months after his death.