When They Came For Us 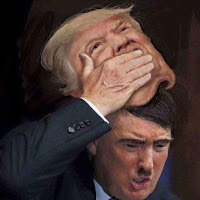 My friend Jeremy has helped me change up my political posts.  No longer will I be only calling Dump, Dump.  No - Jeremy gave me this little nugget:

Jeremy said he was at National Airport peeing next to Teddie Cruise Cruz. He was somewhat lamenting that he might prefer Ted to CheetoFührer.

Isn't it sad when one feels that way. I might actually agree with my friend. When it comes to different levels of evil, it's hard to discern what might have been.

So Dump has taken on the women with his abortion executive whatever. Then Muslims got own executive order - though he swears it is not a Muslim ban....though it is.

They've already eliminated the Jew out of Holocaust Remembrance Day.

Allegedly next it's the gays.

A Washington Post reporter claims there is an anti-LGBT executive order on its way - though the contents are not clear on what it might contain, though a ban on adoption might be part of it.

Sean Spicer (Ari Fleischer's less attractive and meaner-spirited cousin - and yes, you should read that as a 'double ouch!....for both of them') sat at his press briefing dodging the questions like the pussy he is.

If you're going to be the administration of evil - then just own up to it.

Yes - back to another Hitler reference, but that whole Martin Niemöller "they came for....." quote just seems to ringing truer each and every day......and it's coming at breakneck speed.

"Yes - back to another Hitler reference, but that whole Martin Niemöller "they came for....." quote just seems to ringing truer each and every day......and it's coming at breakneck speed."

Doesn't it, though? I refer to _____ as either Fake President, Alternative President, or, my new favorite, Hair Furor.

I'm stunned by it all. And not in a good way.

orange shitstain works fine for me!