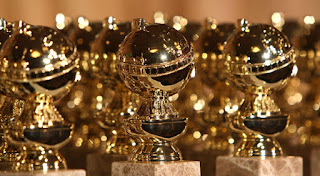 So, Good Ole Mike IM'd me yesterday - yesterday !! - to challenge me to a Golden Globes contest (which is on Sunday).

It would be our first, though he claims we've done it before.  Je don't think so.

As I mentioned to him, the Globes has weird-ass categories, like 'Best Drama or Musical performed by Left Handed People with A- Blood'.   Mike added......who stutter.

There is little rhyme or reason to their categories. And he suggested we play on them all. Lord.

I'm happy to do the movies, but I think I'm staying away from television, as it could take me another night to get all the categories in here. There's a lot of editing just to get it to this level. Sometimes HTML isn't all that fun.

Mike thinks he's all that, because he's seen one (!!!) movie this year. One.  (pssssst......he's voting for Manchester by the Sea for everything.....evening in categories it's not nominated).

Now if I want to win (and I do), I have to think like the Hollywood Foreign Press.  UGH! Torture. Remember, these are people who gave Madonna a Best Actress award!   Yeah. That!

These aren't all my choices of what's best - just what might win.

Which comes to the real reason Mike messaged me today. He must be out of cookies. It must be hell for Peter and Otis with Mike's Holiday Cookie DTs in full effect. He just needs a fix and sees me as an easy target.   .....and clearly, I'm an enabler.

Yeah - like anyone is voting for a Mel Gibson movie!

It might be Washington, but the Other Affleck is riding great reviews.

Weird choices. Miss Sloane was out for 17 minutes. Though Huppert might take it. It is the foreign press. Portman will get it though I don't think her performance was that strong.

You know Benning is serious about her performance because in every scene in the trailer she's smoking. Oooooh.....acting!

Just spitballing here. It will probably go to Moonlight.

I'd vote for Patel, but last year's Oscars kind of will force the hand of any black man who isn't Will Smith......you know, cause he sucks.

Davis might not fit into that mold I mentioned right above. Williams might take it, but probably not.

Original Score. The only musical.  Slam and dunk.

I liked "City of Stars", but it's gonna come down to Timberlake or "How Far I'll Go" from the Hamilton guy, Lin Manuel Miranda.

It will probably be Moana, but I'm hoping here.

I'm looking forward to seeing Elle. It looks great. Toni Erdmann looked dreadful, though the trailer kept saying how "hilarious" it was.  It wasn't.


I suppose bakery is on the line. I don't mind if I lose to and need to concoct something - it's going the post office that grinds my gears......and losing.

I am assuming I'm tipping my hand at the 6th Annual Academy Award Guessing Game®  selections, but not all of these will be on that ballot.

Oh - and the Golden Globe itself?  F'ugly.  Only the People's Choice Award might be worse. But the GG looks like something stored in Bellatrix LeStrange's vault at Gringotts. Or at Mike's house in Boston.

Madame LeStrange would never own anything that tacky.

Most interesting.
Re 'Hacksaw R', on the trailer (the film starts next week - and no, I haven't decided yet, though the story is attractively unusual) MGs name isn't mentioned. It just says "From the award-winning director of 'Braveheart'" without saying who that is. I can only guess that he's still experiencing the after-effects of his drunken/hysterical rant(s) and that his name is still box-office poison. If so must admit I still retain a degree of pleasure in the schadenfreude of it all.

Blobby is so dramatic. But he makes good cookies, so there’s that. I’m hoping for a sweep with my picks on Sunday night. Blobby is already threatening that he won’t stay up for the entire broadcast because of 1. Jimmy Fallon and 2. That beauty sleep he needs so violently. But hey, I’ll just stay up by myself, maybe text myself a few times, telling me what a great job I’m doing. Whatever.

As I always tell Blobby during our contests, may the best man win. And good luck. You’ll need it.

Best Picture, Drama
“Manchester By the Sea” – because as Blobby points out, it’s the only movie I’ve seen so it wins by default. I don’t get out much.

Best Actor, Drama
“Casey Affleck” – He did it all in this film. And he’s cute.

Best Actress, Drama
“Natalie Portman” – I’d rather go with Amy Adams, who has had seven previous Golden Globe nominations, and two wins. But I have no idea what her movie is about, and I’ve heard of Jackie O.

Best Screenplay
“Manchester By the Sea” – out on a limb here, folks…

Best Supporting Actress
“Viola Davis” – Is this the movie trailer I saw when we went to “Manchester By the Sea”? Big dramatic crying scene with snot rolling out of her nose? I hope not…

Best Animated Feature Film
“Zootopia” – Blobby is going highbrow on this one with “Kubo and the Two Strings”. I remember telling him I liked the prequel better, “ Kubo Only Has One String”.