the Facts of Life 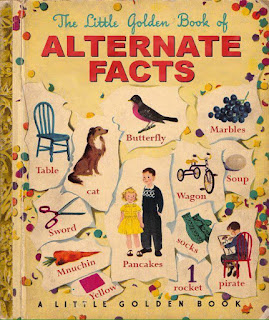 Every time I think my persistent funk since November 8th has lifted even in the slightest, I do something stupid by watching or reading something.

I know - I said I have stopped reading a lot of the news, but some things are unavoidable. Stupid Facebook or overhearing people talking or friends actually asking you shit about politics interferes with all that head / sand burying.

So - this entire shit-fest that is the Dump Propaganda Machine™ is just frightening as fuck.

While clearly I don't agree with repealing the ACA, or probably anything else the man and his administration is going to do, the absolute scariest is the easily (and frequent) lies - and the press, and/ or potentially lack of it.

Yes, it's fun to compare the attendance of the inaugurations, but to be so thin skinned about something that ultimately does not matter in the slightest is insane. This is what they're drawing the line in the sand over?

Not only did they get the attendance wrong at both Obama's and Reagan's swearing-ins wrong, they made up numbers that the Washington Metro put out on ridership. And when some reporter(s) had the audacity to question the new pussy (someone should grab him) press secretary, he fucking walked out the press room.

Here's a little known thing: the press briefings are to end when the press says so, not the press secretary.

And the lying. JFC - enough with the lies. Though Spicer says his 'intention was to never lie to you' {meaning the press}.  He just happened to do it four times in five minutes.

Which of course brings us to alternative facts. Or spinning lies.

But dude - your guys 'won' the White House. Who cares if fewer people showed up to his party. He still gets the job. Blame the weather if you want, but don't say there were a million more people when there were not.  There is video of Pence walking the route with block after block of empty stands.

Save your lies for something big!

This all bothers me. And the yelling at the press and saying they'll be banished basically unless they agree with this administration and only write nice things.

Now personally, I'm confounded by all of it. The press has let Dump off the hook more times than I can even potentially count on the WOPR {it's a War Games reference, people!}.  They almost never held him to a straight answer and barely ever stood up to him when he told a blatant untruth.

This press corps it the best thing to ever happen to any administration, because I don't see Dump's behaviour ever changing.

Yet, save a few editorials - which 710 insisted on reading to me, as I am still head-burying here - seem adamant about holding feet to the fire......which is all well and good.....IF they actually did it.

Still my unrest is real. The tone is tell the lies enough until they become truth. To control - truly control - the press until we are Germany at Poland's door circa 1939.

Yes, another fucking Nazi reference, but it's warranted. Truly warranted.

You know it's bad, when I - a fatalist - thinks this the most fucked up shit ever. It's not even subtle and barely anyone is taking note.

The whole thing with his taxes. Now he will never release them - his stooge Kelly says so. "People don't care....they voted for him."

I'll give her that. Those who voted for that butthole don't care, but somehow thing speeches given to Goldman Sachs should have been.

Personally, I'd have more respect from Dump if he admitted he liked being pissed on. Clearly nothing is changing a large portion of the voting public's mind on him. They'd probably even try it - along with their newly purchased rubber sheets from the Ivanka Trump Collection™.

I'm all over the place on this shit today. Dump makes it hard for rationale people to focus, which could easily be part of his plan. Divide. Conquer.

The thing is: it's time to stop ignoring the problem. It's not going away. We have to deal with it, call them on it. Make their lives as miserable as they plan to make ours.


Song by: John Wesley Harding
Posted by Blobby at 12:02 AM

I started by writing my federal rep/senators, and my state rep/senator.

I sponsored a woman to march in my place last saturday in DC (I have mobility issues).

the press HAS to do a better job in calling out the lies.

and sean and smellyanne are BOTH pussies.

He is very easy to throw off message, off track, he is easily distracted. Just criticize him, he will focus all of his energies on trying to prove you wrong - in the mean time, nothing gets done. Keeping him from getting anything done, is our best hope for the next four years.

I see our PM arrives in town on Friday.
JP

The man, and his minions, have no class, no dignity, no self-respect, no self-worth.

Facts are stubborn things; and whatever may be our wishes, our inclinations, or the dictates of our passions, they cannot alter the state of facts and evidence. John Adams