March Into the Sun 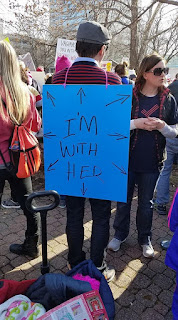 Part of me feels like I missed a big opportunity not going to DC....or Chicago or Boston.

By all accounts, Cleveland had a decent turn out for the Women's March. Clearly not as big as those aforementioned cities. Even my sister-in-law went to the one in Charleston. And I had friends or family who attended in New York, San Jose, Columbus, Portland and Atlanta as well.

There were also a bunch to headed to DC for the main event. I mean, after all, it was deemed, the Women's March on Washington. The DC Metro reported that yesterday, there was 82,000 more riding their trains than on inauguration day.

Allegedly there were over a half-millions people at the DC march (some reports of 650k). So many so, that people didn't wait for the official route, as it moved to slow and took over other avenues and streets.

I certainly didn't see these crowd numbers along what few images I saw of the inaugural route. ....though Dump and his press secretary will tell you I'm lying misrepresenting.  Yeah.  And the Metro is fudging their numbers too ?


Our piddly-ass rally we went to last August.  Though to be fair - the one we went to might have had more port-a-potties.   ....and let's face it, the lack thereof is what would have kept me away from DC.

As it turns out, Becca and her youngest ducked out part way through the DC march. I get it. The crowd can be overwhelming.  ....and well.....Madonna.

Oh Madge. All for women's rights, she is. She's all against ageism and sexism. I mean, that's what she says is the problem against her. It's not. It's her shitty music. But somethings are easier to blame, I suppose.

I'm not sure how I feel about the turn-outs in other regards.

Had this event happened the last week of October, would the election have been different?  But on the other hand, did anyone believe - or want to - that Dump would be where he is now?  Is that the difference? No one thought this kind of turn-out for this kind of travesty was necessary?

My big beef is the aftermath. While I think the march was great and it mattered, but the question is: to whom else?

Do you think anyone residing at 1600 Pennsylvania Ave is going "oh nooooooo.......the women don't like me?"

The problem is - he doesn't give a fuck.

Neither do the majority who reside at the other end of the Mall.  (and no, not the clerks at Things Remembered.)

Well, Dump does - in a way. It's a twisted irony with him. If he didn't care what people thought, he wouldn't tweet or speak at press events about it so much. Yet when it comes to actual action - he doesn't give a shit about anyone but himself. His supporters just don't see that yet.

The march is good for organization and a call to action, but for change in Planned Parenthood, ACA, Equal Pay or Education (just cross gun control off any list with this administration now), you're dreaming.

This fuck is going to be a long hard one. And with no lube. And it's gonna last four years.

....that said, I'm sorry I didn't go to the march. I'm not sure I could have handled being in DC with the administration - and lack of pooperies - but I'm sure I could have survived for a good cause.....and with a pack of Depends.

Song by: Echosmith
Posted by Blobby at 12:02 AM

"The problem is - he doesn't give a fuck. Neither do the majority who reside at the other end of the Mall." - RAMEN!

That is all true, yes, but for those who went to the marches, it had a wonderful psychological effect. I'm so glad I went.

I can't speak for others but in Boston the protests were not only peaceful and massive but hugely inspiring. Organizers had hoped for and estimated crowds of 75,000 - 80,000, but 175,000 people descended upon the city, which is amazing when you realize the city of Boston is only 650,000 people. Our Senator, Elizabeth Warren, rallied the masses when she addressed the crowd.