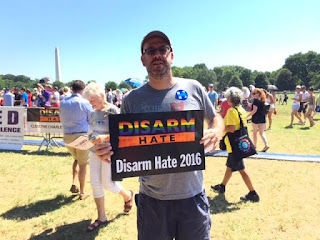 Shortly after the Pulse nightclub shooting, Rebecca suggested we meet up in DC for the newly announced Disarm Hate Rally.

I committed to nothing.

As it got closer, it seemed like we were going to be in DC at that time, but didn't tell Becky. I "thought" (oh yes, quotes!) I wouldn't tell her and that we would surprise her at the rally.

She didn't show - so we were the surprised ones.

Perhaps it was due to the heat. Perhaps it was due to having this when Congress is not in session (the town and many who work in that arena are not around either), but it wasn't overflowing with people. I also don't know how they got the word out. Had it not been for Becky, I'd have never heard boo about it all.

As it turns out not many others did either. I'm guessing 300 folks in all. Though the organizer's site said 10,000.  As much as I'd have loved for it to have been that many, no one benefits from that kind of fallacy.

That is such a NOM tactic. 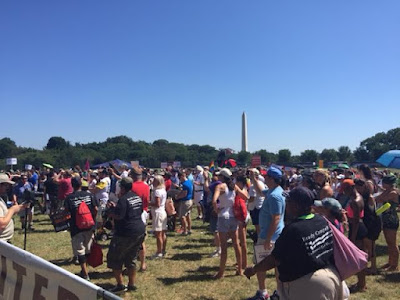 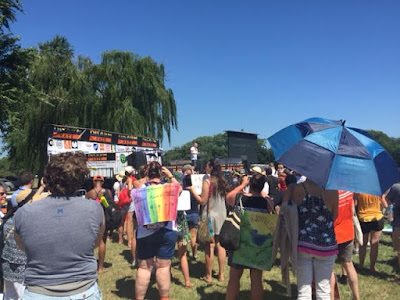 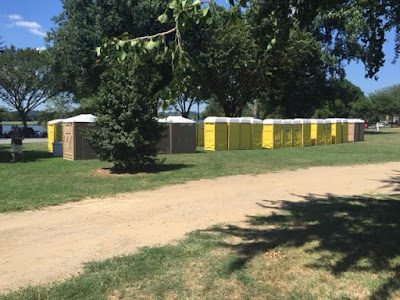 In reality - there was a port-a-john for every 10 people. And that's kind of sad - even if the heat inside had to be stifling.

There were some good speakers (though if you're going to rip off Lin Manuel Miranda's Tony speech, you should at least give him partial credit) and iffy iffy talent.

But it was fun to people watch. 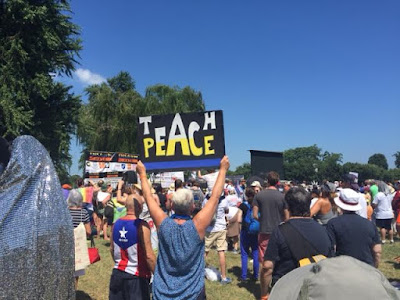 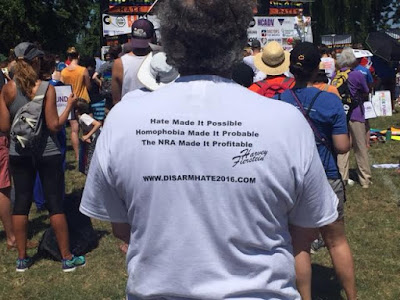 ....and this man unfortunately stood outside the rally area. 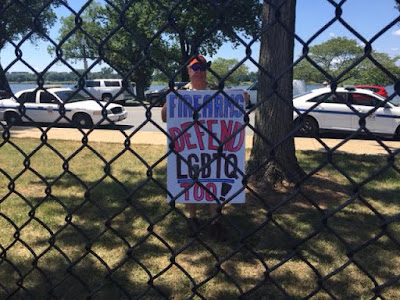 ...and yes, I do mean unfortunately. Besides liking a good debate, I'm 100% sure that gun elimination isn't on the table, and that wasn't even a talking point at the rally. This man's take might have been well formed and interesting.

The guy with the cross that said REPENT SINNERS, well, I'm glad he did stand outside the rally area.

Truth be told, the most popular place to be is where they were handing out water. With 100F heat, it was important to stay hydrated.

My most favourite part of the rally was the 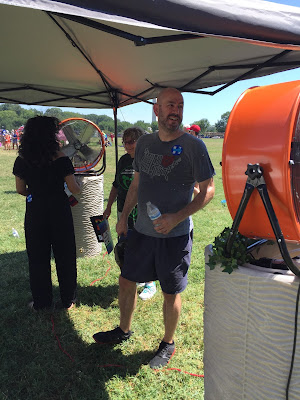 The shirt was already soaked with sweat, but the cold water felt good.

I truly think the problem with the rally was timing. August in DC was part of it, but the call to action was too late. The Orlando shooting was almost two months ago. That was a lifetime ago - and you truly need to strike while the iron is hot. Sad but true.

Shootings in Dallas, New Orleans and a bombing in Nice happened since Pulse. People have no attention span.  I totally get it is not easy to get permits, get the word out and coordinate a large-ish event, but you'd have had better turn-out with a quick off the cuff rally than you did yesterday. Still I applaud them for doing it.

I'd say any press is good press.......but I'm not sure there was anyone there to notice.

good for you for going!

I'm thankful you went, but I agree the timing was terrible. Rallies are just as important for those who don't attend them but witness them as they move about. The fact that Congress was on recess makes the rally even less successful, accompanied by the poor advertising and the scorching weather.