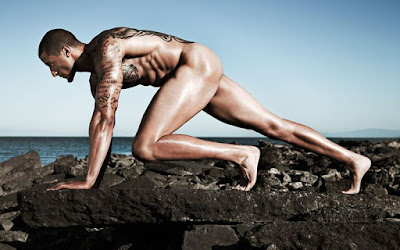 I do not care one way or the other about Colin Kaepernick other than his spread in the ESPN Body Issue a few years back.

It's a shame most (or a lot) of his tatts are religious themed. But that's his choice and if you don't look closely, the ink looks good on him.

Apparently what doesn't look good on him - to some - is standing up for himself....and not standing for the National Anthem.

I'll admit, I don't see how sitting for that song is a protest - except that now you have the media's ear and can expound all you want on the injustice of being black in this country. I suppose if you said it before, no one would take that much of a second look.

That's me saying that. Many others are not.  They're quite furious.

Their unintentional, multiple-leveled irony is all about the song symbolizing freedom.

But you can't reason with people like that. You just can't.

Yes, there is a certain expectation to stand and take off your hat to the playing of the "Star Spangled Banner". Mostly because the sports announcer tells you to.

It's not "freedom" if you're forced to do it. Is it?  (the question is rhetorical.)

Let's not forget that pesky Constitution - the one that people like Il Douche, Teddy Bear Cruz and Pan Face McConnell seem to forget when it's convenient, has a little passage on the Freedom of Expression in the First Amendment.

Ok, technically, that's not one of the rights, though the court ruled that it is part of amendment, stating:

"implicit in the right to engage in activities protected by the First Amendment" is "a corresponding right to associate with others in pursuit of a wide variety of political, social, economic, educational, religious, and cultural ends".

I made the mistake of reading people's comments to the non-event.  BIG mistake.

Of course, there were a few supporters of Mr. K, but more often than not, it was the 'Murica people who were overly offended. Emphasis on the 'overly'.  Many of them, alleged veterans. They were spouting off about 'freedom' of course. But then they started deteriorating into 'the Pledge of Allegiance'  - how and why is still unclear to me. The word 'Muslim' came into the conversation too.

I suppose anyone who is mixed race (like Kaepernick) is automatically tagged non-christian or something.

Who the fuck are these detractors of Colin even kidding - other than themselves?  It's the non-justice for many of which this guy didn't take a stand, but copped a squat. And even more important - these people don't believe in liberty and justice 'for all'. Quite the opposite.

Again - the irony, the stupidity, the entire thing, is lost on them. And again, there is no reasoning with them, so I'd like to say 'why bother?'. But then that gives them the leg up. Ignoring these asswipes isn't the answer either. That's how we get into having Il Douche as an actual potential president.

I blame ronnie raygun for giving these asswipes a say in anything.

I don't see what the fuss is about, it is not like he is saying nasty, sexist, racist things and threatening to exclude or throw out of the country people based on where they are from or what religion they practice,

The fact that many of these "real" Muricans, who are angry that he sat out the anthem to protest racism in this country, are now calling him every racia slur they can think of is proof that he should be sitting out the anthem.

Thank you Blobby for speaking out. What you say is true. Standing is a choice, it's appreciated but no where is it required.
Reading comments is a mine field. I ran into one yesterday where the overall consensus was about stopping the illegal Puerto Rican immigration. I got out of there fast.

Couldn't agree with you more!