the President's Penis is Missing 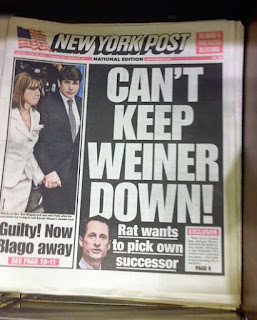 Believe it or not, I took the title image back in June 2011. Well, I guess, why wouldn't you believe it?

I even remember where I took it. Not that you care.

You'll all disagree, but I have got to hand it to the man.

While I've never seen a picture of his schlong, even if it's below average, it is overly self-assured men like him helped men make fire and go to the moon.

Let's face it, we've all seen his face - and that ain't nothin' to write home about. Yet he is filled with this sense of confidence....or delusion (or both) that makes him think he is g-d's gift to women....or at least SMS.

He's not embarrassed by whatever he's showing these people, and if it were something to

I don't know a lot about his former tweets and sexting, but I know he did them. And I have read even less about this go around. I was more surprised to find out his soon-to-be ex-wife wasn't already his ex-wife.

None of us have insight into that relationship, so who am I to judge.

Il Douche is judging.....and somehow putting this back on the Clinton campaign. Yes. The soon-to-be ex works for Hillary. But one can hardly tie this into that camp. And if one wants to talk about cheating, divorcing spouses and the likes.....maybe Il Douche could turn the mirror to himself.

However, that's not what people with borderline personality disorder do.

You really need to start at the 32 second mark...and yes, you have to watch until the very end. I promise....it all ties together.

weiner's weiner is much ado about nothing (says the size queen).

it's a wonder his wife put up with his shit THIS long. she should give him the lorena bobbitt treatment!