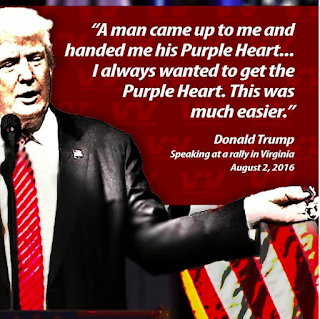 Is anyone a bigger douche than this guy?

Clearly, the question is rhetorical.

Yes Donna, who got / took five deferments for Viet Nam, literally wants (and gets) medals handed to him.

I know there are a lot of himbots (I won't type his name) that are military and their love for guns and 'Murica are a their "reason" to vote for him.

You know there are people who are maimed for life who get these medals. And the posthumous.

My father had two. You should have seen the massive amount of scar tissue on his lower leg. I'm guessing, unlike others, my father got off easy.

As it turns out, dad didn't get his easier than Presidential WannaBe DickWad.

Each and every day he says something offensive and worse than the day before.

I'd ask: "where does it end?" but like my opening salvo, this too is rhetorical.

He complains about people attacking him - like the Khans. He is so thin skinned, yet - and not that I have to tell any of you - he has no problem not just attacking folks, but lies about them and then lying about doing it at all.

Honestly, I try to avoid the news, but it can't be helped.

he is like a bad car accident. You want to avoid but you can't help but look.

I swear, he could say "any one who votes for me is nuts," and his core voters would still vote for him - maybe they think that if he is telling the truth there . . . even his voters can't be that dumb - can they?

I beginning to think he making a conscious effort to lose the election.

And I'm good with that because he's taking the GOP down with him.

No person "wants" a purple heart who is in their right mind. Which explains Trump's view. To him, its a trinket, something to to frame on the wall and boast about like a fish he caught. He doesn't understand that even though he was given it by a vet that A Purple Heart is is earned. It is a symbol from a grateful nation of the sacrifice made in the shedding of blood in the service of our military. No one WANTS to take a bullit? Lose a leg? Get burns over any percentage of body to get a medal? You get it when you are physically harmed, bleeding in the discharge of your duty. Its a reconition of sacrifice beyond the use of your day. The soliders and vets who get these are heros. Trump is not. He's a schmuck.