Everyones Got a Story 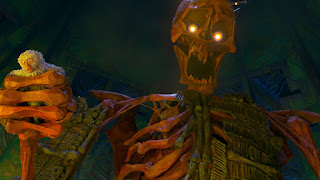 710 lamented on vacation that we were behind in our movies. We're not, but it's true that it had been pushing a month since we last took to the theater.

While we were way, Kubo and the Two Strings was released. On paper it isn't anything I would have thought would be on interest. What looked like a Japanese animae-style isn't really my thing.

Still we'd seen two previews during other movies and I was more than intrigued.

'Preview' would be the wrong term. They showed a clip of the movie. It hooked me. We waited for the release date, only to be in NC when it came out. While the local theater might have been showing it, the place itself looked like you'd get bed bugs just by pulling into the parking lot.

The movie starts with line: "If you must blink, do it now!".

True enough. The film is beautifully animated - enough so that you don't want to blink or look away. The characters, the settings, the backgrounds. All of it is great work, be it animation, cg or stop-motion.

The story has a good narrative. Kubo himself is a storyteller. So good in fact - other than never coming up with an ending to them - that I was never quite sure if after the story he initially crafted "ended" if the following story was a different one.....or a continuation in another form.

The tale and movie are done in such a way, one could come away with different variations or possibilities.

While seeing the preview....and the movie...I just assumed the adult male lead (not Kubo) was George Clooney. 710 did as well. During the preview, I kept thinking "wow, Clooney really is a one-note actor".  During the movie I felt differently and grew to like what he was doing. Imagine my surprise when I find out it was Matthew McConaughey!!  I'll give it up for him - as if I thought it was marginal Clooney doing the job, imagine how much better crappy Matthew fared. Yes, I know he has an Oscar - so does Cuba Gooding Jr.  B.F.D.

Other voices include Rooney Mara, Charlize Theron, Ralph Fiennes, Brenda Vacarro (!!!) and yes, George Takei (and yes, he has an "ohhh my!" line).

We saw Anomalisa earlier this year. Two adult animated movies. I'm not sure I've done that in a year, let alone in a life time.

Kubo and the Two Strings was a really good choice. It ranks way up there in the movies I've seen this year.