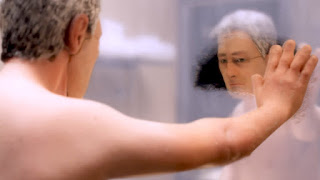 We are kicking it  - movie-wise, that is.

I may have sold us short increasing our cinema going goal by 33.33%. On paper it seems like a huge increase. If our current rate keeps up (and let's not kid ourselves, it won't), we are headed toward the 40 range.

We had been seeing previews for the last month or two.

I'm not a huge fan of Kaufman or his movies. He tries too too hard to be either cerebral, weird or both. To a degree. Anomalisa isn't any less weird - but really, how can you not go when the local review has this disclaimer???

....and trust me, if there were a Goooooogle image of stop-motion scrod-chomping, you'd be seeing it as the title image. Count your lucky stars.

Per usual, I went into the movie knowing next to nothing - about the movie, that is. The previews didn't tell much of anything.

First off, the attention to detail is a-mah-zing. The hotel that "Michael" stays in, and the taxi, in which he gets to said hotel, have every little thing down - from sight and sound. The things that look "odd" are the puppets themselves. It's almost like they have a mask on their face a la Hannibal Lecter.

While only 90 minutes long, the timing is hard to gauge. It is a story basically in 4/4 time. Save one scene - a dream sequence - the pace of the movie remains the same. Until I looked at my phone after it ended, I would have sworn we did not pass the 60 minute mark.

Without too much give away, Michael sees and hears every person as same as the last....or next. So much so that there are only three voices in the movie - the main male and female character (Lisa). The rest are the characters are the voiced by the same person....same tone....same or similar, sad face, whether man or woman.

Only Lisa has a different voice; a different face. There is a reason for this. Things fall into place eventually for the viewer, as there were parts of Michael's past that lead up to her.

That's all I'll give away.

It's an interesting film, though I won't go as far as to say it was ultimately satisfying.

I don't know if I'd have walked out during "puppet sex," but I know that, had I known about "puppet sex," I might have stayed away.
It sounds kinda try hard.

I like the pensive photo. It is very peaceful and thoughtful for me.

I saw the trailer for this film while at the cinema seeing 'Carol'. At the trailer's conclusion I said to my movie companion "Ummmmmmm no."