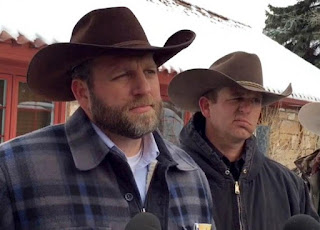 First off - what the fuck is wrong with the guy's face on the right?  Chaw? Stroke?  Smells something bad? All of the above?

I said yesterday, I had little to say about this, but
well, what's not to love about these dipshit ornithology terrorists in Oregon?

They have guns, but no food. Aren't most stupid-ass gun-owning justifications: they're for hunting.

Well - then go hunt for you fucking food you lazy-ass morons. Of course, they don't have the women-folk there to clean and cook it, so.........what's a man to do?


This is better than Betty White reading Peterotica.

And if these rebels don't have wi-fi they are lucky. I'm guessing if they saw this stuff, they would fucking freak, because you have to believe nothing is worse to them than being considered "faggots".

And my lord - the jokes all around being made at their expense. They can call themselves whatever they want, but 'laughing stocks' probably isn't one of them.

Has someone used "I wish I knew how to quit you" yet?

That's what I like about you Bloddy - you know how to kick ass (or arse as I say in the UK).
JP

I wonder if the photo thing is an artifact, like you get when someone moves, etc. TBH, I've long wondered what is wrong with a certain blogger (who resides in the 212), because his face looks odd in pix where he is smiling. Bell's Palsy? ~~~ NB

With all due respect, many of the knocks you claim against them you display in your post. We can all make assumptions, display hatred, react with intolerance, and insult those for being different. But it only makes us the same as the focus of our contempt.

Bells Palsy is my vote for the face in the picture; had a good friend with that condition, and that is mostly what he looked like.