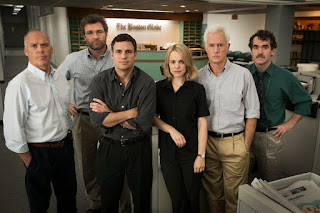 Had I gone to see Spotlight when my sister told me to (pre-Thanksgiving), I would venture to guess that I would say the movie would have been the best of 2015.

I mean, it still might be, but it is now in my 2016 tally. We saw it last Sunday, but just getting to post about it now.

Tricia never likes anything, so when she and her husband thought that Spotlight was great (and took their 20-something year old kids), it kind of pricked up my ears.

Priests, child molestation and investigative journalism. On paper, it makes it a hard sell as a 'must see' movie, but it's not SVU. There is no visual / implied abuse....so that's a plus. The paper part is done possibly better than All the President's Men too.

First off - what movie isn't better with Mark Ruffalo in it? None of them - is the short answer.

The man is on track to finally snag his Oscar. Not only is his acting superb here, his main monologue is just perfect and had the attention of everyone in the theater. And he visually transforms himself with out a prosthetic anything and is based solely on how he uses his mouth. It is fascinating to watch.

Michael Keaton does a great job. He might not actually be nominated or win anything for his role, but he's got to feel pretty good about being in two back to back movies that will (most likely) win Best Picture. And his is a solid performance.

The rest of the cast is extremely solid too. John Slattery is good. Stanley Tucci - excellent. Jamie Sheridan, looking like he's aged way too much in way too little of time. I like Rachel McAdams a lot and thinks she has more potential - but it's hard to play it toned down after being Regina George. Still she was really good in the Time Traveler's Wife - and she's good here too.

Oh - and to have Liev Schreiber's voice. ,,,or at least have it whispered in my ear!  My word!

There are lots and lots of character actors you've seen any number of places...and it's always great to see the little seen Billy Crudup.

Still the writing is solid, the direction is detailed, but not complicated and the story is informative without beating you over the head with a 2x4.

Of course, the possible most emotional moment(s) is at the end when more victims come forward, or if you stay with the credits, even early on, they list every city, state, country that has reported abuse by Catholic priests.  ....and the list takes up three movie screens.

Mind you - Spotlight has been out for over two months. Almost no movie lasts that long in a theater anymore. Granted, it is in only one theater still in Cleveland - and one showing at that one (which seems to be a recurring thing with the movies we've seen in the last four months!).

Due to the fact that this was probably the last week of viewing in town, we were relegated to the smallest theater in the complex. 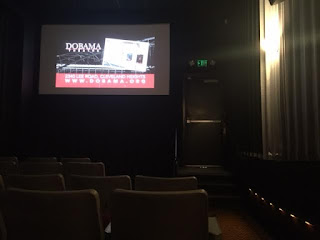 Notice how big the exit door is compared to the screen.

I think it's fairly safe to say that any screening room in any of the Real Housewives houses are bigger than this theater. That said, almost every seat ended up being filled.

If you have the chance, I highly recommend a viewing.

I agree about Mark Ruffalo. BTW, I made the Thai basil chicken dish. Excellent. Thanks!

Been looking forward to this since first heard about it. Hasn't opened here yet but trailers have started - and it's in my diary for three weeks hence. And now with your strong endorsement it's an imperative.
- Oh, and I'm (yet) another Mark R. fan.

I'm hoping it comes near us because I'd love to see it.