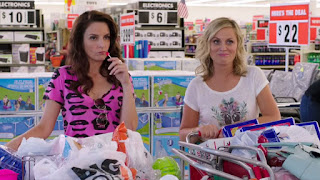 I arbitrarily made 18 our goal for movies to see in the theater for 2016.

I'm sure I am getting carried away with the number - as I'm not 100% sure we can make this. We've only matched the count of 12 twice and only beat it once.

And there are 3-4 movies currently out we want to see and a handful on the way - so maybe it's not unpossible. Undersell, over deliver.

Most of the last movies had been my selection, and the ones on the 3-4 list were the 'downers' if you will: the Big Short or Spotlight (though I hear it's great),  710 picked Sisters.

I hadn't heard anything bad about the movie but to be honest, I've heard no praise either.

From the premise - the "girls" go visit their childhood home before it's sold and have one last party - much of this seems to have been done in one form or another, though usually not while the stars are in their mid-40s. There is a probably a reason for that. But what could possibly go wrong with an all-out party for one last binge?  Oh, that's right...........

On the premise alone, I will admit, I kind of groaned. In actuality, I laughed quite a bit.  ....though not so much at the leads.

As much as it might pain me to say, I'm not very sure that Tina Fey and Amy Poehler are 'movie folk'. They should probably stick to the medium in which they excel. Not that there is anything wrong with television.

Sure, you can see that Fey and Poehler have a professional rapport that is easy and natural, but it doesn't necessarily make for good movie fodder. It is by no means bad.

Mind you - save Dianne Weist (she has two Oscars, ya know), everyone else in the film are tv folk and the others just had some great material. And there wasn't one thing, or one person, that set off the audience. We all laughed at very different things.

I was surprised how crowded it was, considering compared to other films out, it doesn't seem to have a huge marketing presence.

It seems that both Fey and Poehler got one cast members from each of their respective shows - Lutz (30 Rock) and Jeremy Jamm (Parks and Rec).  Both of them completely wasted.

Lots of SNL folks appear - Maya Rudolph (well played), Rachel Dratch (also wasted), Kate McKinnon (well done), and Bobby Moynihan.  And bunches of other folks - an ok Samantha Bee, and spot on Greta Lee, whom you might know from hilarious cameos in Girls or Inside Amy Schumer.  And while I have never thought the main male lead, Ike Barinholtz, was anything great in the Mindy Project (well, the entire show isn't anything great), he was extremely likable here.

Oh - and John Cena in a wife-beater......alone worth the price of admission.  ...and he's probably better here than he was in last Summer's Trainwreck.

Yes, some of Sisters was predictable, but for the bigger picture, it was easy to overlook that. And the movie is profanity-laden, so it clearly earns its R rating.

I really just thought of sitting around drinking with Morty, Becca & Co and watching this. It would be good with a friend's viewing.....while slightly tipsy.

So I went in with a little hesitation, but it dissipated fairly quickly. Sisters won't win any awards, but it's a good distraction for two hours.

Song by: Thomas Dolby
Posted by Blobby at 12:05 AM

I was mildy minded to see 'Sisters' but it only came for one week in a mid-evening screening and has now gone, I think. probably because the 'stars' (apart from Dianne Wiest) are not such well-known names here. Still, if it turns up again, as it might, as a one-off matinee, I may give it a shot though in light of what you say, without much enthusing.

After viewing the previews, I realized that I'd seen this movie about a dozen times already and, while I like Fey and Poehler, so I'll pass.

Just noticed that I get a chance to see it next week, so MAY go.