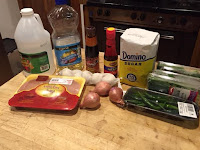 Ooooh - something very new.  For me. Thai food.

I love Thai, but have never attempted it. I never even thought about it. And one could argue it is like the Japanese or Chinese dishes I've put into our regular repertoire, but it is slightly different.

Flavours are a bit more complex with the Thai Chicken and Basil - in a good way - a bit more labour intensive, and arguably more aromatic. But in short: I loved it.

One can probably use Thai Basil, but we couldn't locate it and the better produce establishments were closed on New Year's Day.

I didn't even get this recipe. 710 found it on America's Test Kitchen. I must have missed that episode. And I will miss the show after this season when Christopher Kimball leaves - as he quit or was fired, depending on which story you read. The whole show might collapse in 2017 (the 2016 shows have already been filmed), as I have back-storied that Julia and Bridget loathe each other. I have no basis for this of course, but 710 enjoys my stories on their hate when the show is on.

710 and I teamed up to cook, so nothing seemed too bad, and even if you're on your own, with a little planning, prep time isn't horrid. Cooking time goes quickly. 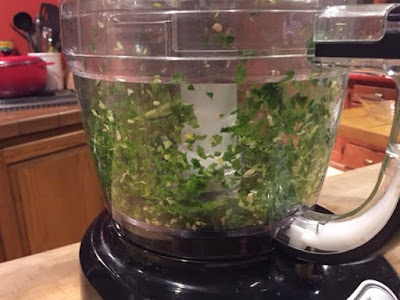 In a food processor, combine half the basil leaves (or 1 cup), garlic, Thai chilies. Pulse for 6-10, one second pulses. Since we never worked with these chilies, we seeded them and took out their ribs. Next time, I think we'd only do that with half of them.  ....but we like spicy.

The great smells with the above process. 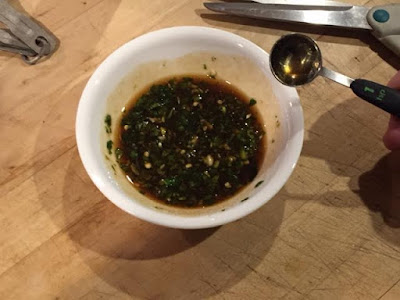 In a bowl, combine Vinegar, Sugar, Oyster Sauce and 1 tablespoon of Fish Sauce and one tablespoon of the basil / garlic / chili mixture. Combine until sugar has dissolved. 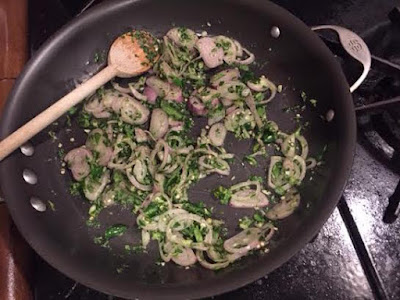 Along with two tablespoons of oil, the rest of the basil / garlic / chili mixture goes into a heavy bottom pan, along with the sliced shallots. Cook over medium-low heat until the shallots get golden brown (8-10 min, though mine never ever got 'golden'). 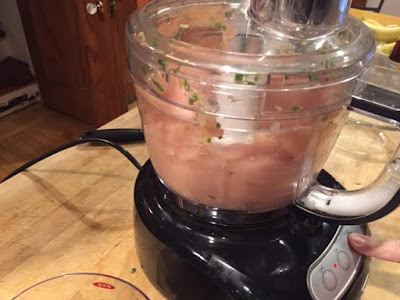 Put 2" pieces of chicken into food processor. Pulse 6-8 times with one second pulses. 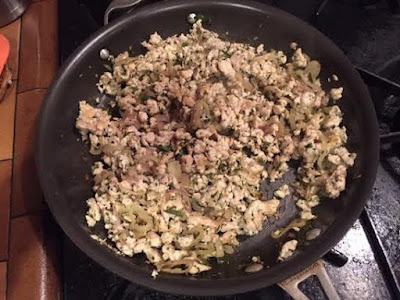 Add chicken to the skillet and increase heat to medium. Break chicken up with a spatula and cook until all the pink is gone (3-4 minutes). Add the bowl mixture from the second step.  Combine and cook for another minute. 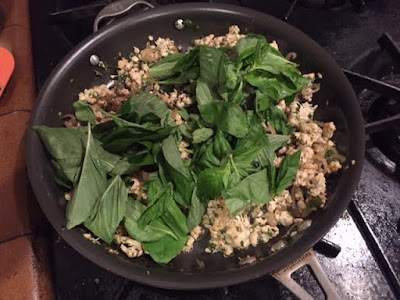 Add other cup of basil. Stir in and let it wilt with the heat. My pan was fairly shallow, so things fell out - so careful on that stirring. 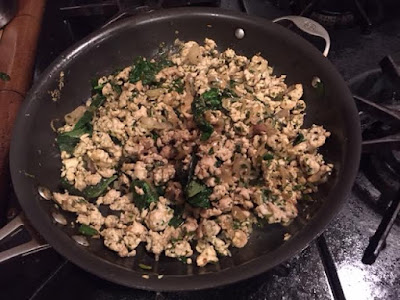 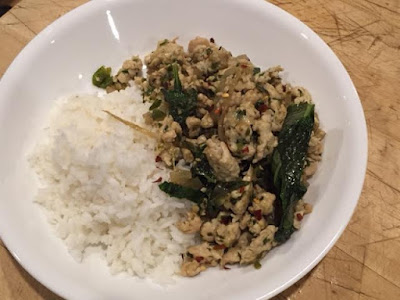 Serve with rice. Add red pepper flakes if you choose. I did.

Again, I don't know much (i.e. nothing!) about Thai cooking. To control flavour for each individual person, they suggest having fish sauce, sugar and vinegar at the ready, for folks to add as they see fit. Being able to do that might be great, but it's new territory for me.

Still, the flavours and aromas for this dish had great depth. It's totally worth it and serves 4  - or at least 4 grown men.

This looks great and not at all difficult. I just added oyster sauce to my shopping list (ran out about a year ago and haven't needed it since) so I can make this dish in the coming weeks.

This is my absolute favourite Thai Dish and I cook it several times a month, although I have to make the prep with my big sharp knife.
I highly recommend the Original Thai Basil which is very different from the usual one. I can't get it all the time, so I put in in the freezer.

This looks and sounds delicious--too bad we don't yet have smell-o-blogspot.

I'm giving this one a shot!

I will totally do this this weekend.

Unknown said...
This comment has been removed by a blog administrator.
6:12 AM EST