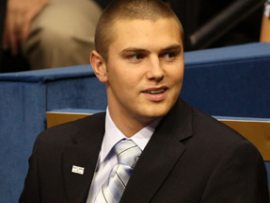 Oh, how fucking sweet this is!

Well, I mean, of course for the woman, it's not. Hitting a woman is never sweet.

For a douche named Track Palin, I'm sure he isn't finding it that sweet.

Again, not the hitting part, but the being held without bail part for domestic violence part.

On the other hand - who cares?

I mean, we should, but it is the Palin family. Nothing ever sticks to them.

Loser VP candidate. Quitter Governor. Lying Mother. Lying Todd. Whoring teen daughter. Homo hating teen daughter.Divorced son whose wife had a baby three months after being married (my math might be off, but that seems too quick!).  Drunk / disorderly entire clan. Whoring (and probably adulterer) daughter who claims abstinence (it's the same 'whoring teen daughter' just older; no wiser). And now a fist-wielding son (same as the divorced; fucking out of wedlock guy).

Notice I didn't even mention that special needs kid, which may or may not be that skanky Bristol's actual first kid......just passed off as Half-Governor Palin's.

I really don't get it: Are we as a country this dumb?

This is a family who holds everyone else accountable for everything that goes wrong, but anyone who turns the mirror on them are horrible, vile people.

And this is a woman much of an entire political party looks to for endorsements, sound bytes and wisdom on family, values, and how things should work?

I wouldn't give a fuck if they just owned up to it, because let's face it - save a failed VP run and Governorship - I think we've just defined 89% of the households in Oklahoma and 98% in Mississippi.

But part of what Track is facing is a weapons charge. This is the GOP Family we are talking about here. The only way he'd be found guilty is if he didn't use a weapon.

And beating a woman? I think that is in the GOP version of constitution - a man's g-d given right. Or is that the NFL? I get them confused.

No....wait. The GOP doesn't have as many minorities.

Is it so wrong that I want something bad to one of these guys?

Some of us regard our own Royal Family as 'dysfunctional', but (cripes!) they can't hold a candle to the Palins! What is so stupefying is that STILL there are so many who give the Ps the adulation they'd give if they'd been Jesus, Mary and Joseph reincarnated. It's not funny any more, if it ever was - it's just plain scary!

and howsabout yesterday's 69 between mama moosemess and the rump? "he's a nice guy, she's a nice girl" slurp slurp. makes ya wanna hurl!

Thank you for saying, what others were thinking. If it were me, I'd decline her endorsement.

I almost never turn on the tv. Yesterday I did at the moment she was starting her endorsement speech. I hadn't turned it on to see or hear her but found I couldn't change the channel. I've never heard a string of incoherent babbling like I witnessed. The words seemed to be English but I couldn't understand a single thought.

A bunch of holier-than-thou fuckwads trying to masquerade as Christians and the illiterate right buys into it.

That are are the poster children for White Trash doesn't surprise me. That smart people find her engaging does. Now she wants to be Trumps running mate. Oy!

I thought the radio station was playing a joke at first about her as Trump's running mate. Perfect disaster team to ruin your country.

Did you catch her saying her spawn's PTSD is Obama's fault? Why didn't someone tell her that maybe if she did less talkin' and maybe a bit more motherin' she might be helping her son. I saw a report on the local news about a house fire last night and I blamed it on Obama, too. Must be catchy.