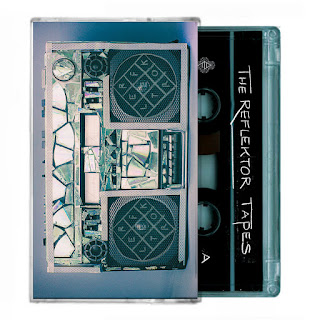 Q:  When is a Record of the Month not a record?

A:  When it's a fucking cassette.


I really like Arcade Fire - and their concert two years ago is still one of the best live shows I've ever seen - but they make it really really hard sometimes to be a "fan".

First you have to fight off the comments of only "hipsters" like the band. I'm as far from being a hipster as you could possibly get. At least, I'd like to believe that.

After their ambitious double disk, Reflektor, and their long tour, they had a limited release documentary film called the Reflektor Tapes. If it ever came to our art-house theater, I missed it.

That is fine. But they released five new songs and one remix from Relektor on the Reflektor Tapes.....and only one fucking cassette.

I'm sorry - but what a complete douche move. They make it hard for people not to believe those 'hipster' comments.

Vinyl might be making a comeback - but cassettes are not. Nor are they ever going to. And who (besides possibly me) still has a cassette deck? Oh yes, I still have it, though it is packed away along with my 5-CD changer......and my CDs.

But honestly, what is the fucking return on investment with this ploy?

You market is extremely limited and the expense of finding some manufacturing facility that actually makes pre-recorded cassettes must have been the proverbial needle in the haystack.

And what exactly is the point of making music that such few people would fucking hear?

Of course, I assumed that the cassette thing was a limited release and then eventually vinyl, cds and downloads would follow.  This is why one never assumes. It is still only available on cassette.

Finding no other way, I might have used the last year to try to find some of those songs via illegal download file sharing programs. Yes, the band gets no money from this - but the way I see it, they were kind of asking for it.  (come get me RIAA - I dare ya!)

Even the file sharing has been a struggle, but you can see why: not only does some poor sap have to actually buy the cassette, but then convert it to an .mp3 format.

Who has the time, energy or inclination?

So a year (plus) later, and I have two of the three songs. THREE. And just like those bears - one is good, one is bad, and one is just about right.

Loving "Crucified Again".  I like "Get Right" - with a more industrial feel. I have a harder time getting into "Aporcrypha".

Maybe the other two songs and one remix would make the album.....or break it. But we'll never know.

A: when you don't actually (and can't actually) acquire the album.
Posted by Blobby at 12:01 AM

Morty said...
This comment has been removed by a blog administrator.
7:40 AM EST