Shoot Off Your Mouth 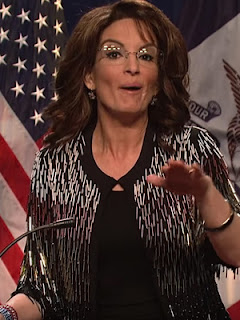 When is an endorsement more of a liability than it is an asset?

Of course, one immediately goes to Sarah Palin giving the 'youbetcha' to the Donald. ....but more on that in a second.

Where's the benefit for Teddy boy? Chances are, he's already got his own stupid Lone Star state wrapped up anyways...I mean, assuming he stays in the race long enough to get to the Texas primary.

Where does Perry think his influence reaches outside of that dumb-fuck state?

I suppose that ringing endorsement is about on par with Miss Lindsey Graham stumping for ¡Jeb!.

It just makes the mind boggle - who will George Pataki get behind ????  I suppose Rick Santorum could use that single vote....as I assume that Mrs. Pataki was the only one who would have voted for George.

And I'll be up front - it took a long time for me to even muster up the courage to pseudo-watch Track's - the woman beater - mom give praise to thrice married Donald. And even then I did it via Stephen Colbert - and even he couldn't make it funny. It was painful to watch - the entire thing.

I didn't even read much about what people thought. I know what my peeps thought of it, even though we never discussed it. We didn't have to. But for what little chatter I actually heard, none of it - and i mean NONE of it - was about the fucking face the Donald kept making during her babbling.

....and this was one of his most engaged looks - even if he doesn't seem that thrilled.

Does this look like a man who was happy to be there - or happy to have this nobody there?


...of course, the Palin-tologists must have loved T-rump's comment about being able to shoot someone in the middle of Fifth Avenue and still win.

It's such a dangerous game he's playing. It's just fucked up.

So maybe for Donny, Palin isn't a liability. But it's tough when you're a bigger liability than she.

I have to admit, lately I've been thinking a lot about the movie the Dead Zone....which is a very underrated Stephen King adaptation.

For those who haven't seen (or read) it - and it is about 33 years old - it deals with a man who lives through a tragic accident to awaken being able to see the future when he touches certain people. One of the people he encounters is a deranged Jeb Bartlett presidential candidate...and plots his assassination.

I think [t]Rump sobered up the Mama Grizzly Bear™ just long enough for her to endorse him so the evangelical loons will fall in line, and fairly soon--I'm thinking RIGHT after Iowa--he'll send her packing back to the porch of her double-wide in Alaska so she can keep watching Russia.

I'm not quite sure she was sober. I happened on that so called endorsement by accident while it was happening live. It was such a train wreck I was frozen and couldn't change the channel no matter how much I wanted to. How does one graduate elementary, much less high, school with that grammar?

I have a gift just like that character from The Dead Zone. Only rather than seeing how people are going to die, when I shake their hand I see their wallpaper.
JP

I like your question; does an endorsement really make a difference/
I think the KKK 'endorsed' Mr Trump, which says a lot. Worse, I think Mr. Trump hasn't rejected it.