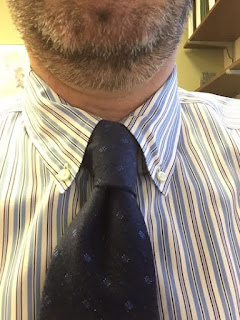 So here I am, week four of work, and I have yet to wear the same tie twice. And honestly, I haven't even made a dent in the tie selection I could use.

What if it comes back in style?  What if I finally find the right suit and shirt and place to wear such a tie?

There is an art to wearing a tie.

It is not just the length. Really people.....a tie ends at the top of your belt....not to the middle of your zipper and certainly not to the third button on your shirt. There are different kinds of knots, but I like mine middling. Not a thin knot and not those fucking huge ones that the prissy realtors on Selling New York wear........though I do wonder how they do that.

But to get a tie just right, it has to be the correct fabric.

Ok - it's not that I know exactly what the fabric should be, but some neckwear are just harder to handle than others. Silky fabrics are much harder to control.

And I'm not Dr. Spo - bow ties are probably beyond me. Even at weddings I have been in, the bows were clasped, not tied. Oh the shame!

I have this uncanny knack for knowing my ties - even though there are dozens upon dozens of them, and even if I haven't worn a certain one for years.

I know that if it is tie A, I need to start it a certain way, or knot it a certain way, I know if it is tie B, I have a piece of tape holding the label on, so I can still tuck the back part of the tie into it.  I know if it is my Jerry Garcia tie, it has a rip on the back that no one will see, but it's only a matter of time before the tie is dead and buried.....much like Jerry himself.

A few years ago, when my cousin Bill passed away, he had his ties distributed to folks who attended Shiva. I probably arrived too late for the great ties - but I wasn't really there to collect on anything but family time. I was honored to walk away with the one I have. It's a little out of style, but I know one day I will wear it.

Oddly, only one person at his stone setting came to the service in one of Bill's ties.....and it was a woman. It was such a great idea and one of which I wished I had thought. Still, I look at that tie and think "one day....."

I know you're thinking - WTF is he talking about with these ties?

For the holidays, my mother got me two new ties, thinking I'd need them for my new job. I opened them and almost immediately thought, "oh - how bland". But upon reflection and deciding if I wanted to go to the outlet mall to return them, I thought - I don't actually have (m)any bland ties....at least by my standards.

But "bland" works. It is not easy to match one of my ties with that shirt you see in the title image. You can easily get clashing patterns. And I don't always like to wear a solid colour shirt. So, while the tie might not have been "my style", it actually works.

I was kind of laughing at myself yesterday morning as I dressed and made three or four attempts at tying the tie. It was new and unfamiliar to me - unlike the rest in my closet. I had to get to know it; how to wear it. I kept readjusting it all day, not that it needed it. But I did - I needed to know that it was just right.

But when it was said and done, it wasn't long enough...at least for me. No one else would have noticed the 1/4" above the top of my belt, but it bugged the ever-loving fucking out of me.

Song by: Kelly Clarkson
Posted by Blobby at 12:08 AM

only spo can rock a bow tie the way he does.

I tie a half Windsor on mine. Only knot I know.

Luckily, I have never worked in a job where a tie was mandatory or necessary or expected.
At Anne Marie: you should see Carlos in a bow tie ... cutest man EVER!!

You look very distinguished. I will be expecting a whole post on button down shirts.
Jean-Paul

I recall once knowing how to tie a half dozen knots depending on the fabric, looks and fancy I felt.
Alas bow ties are always tied the same way. Once in awhile I enjoy a long time merely to feel the knot form in the hands. I think ties (long or bow) remain a part of a proper gent's looks.

I was just never a tie guy. I don't mind a bow tie at all though.

Which knots do you favor? Alas, like Fearsome Beard, I only know the one, and to my shame I'm not even sure what it's called. It's the one I learned in Scouts, is all I can say for sure at this point. Also, what are your feelings on the dimple (or should I take the answer from the photo?) ~~~ NB