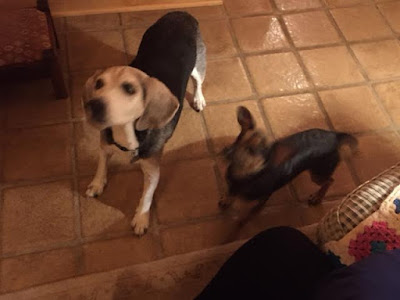 Petey and his new friend, Marvin.

Marvin is a frickin' cute 3 year old Chihuahua / Dachshund mix. I've never seen Petey play with another dog like he did with Marvin. It was fun to watch. 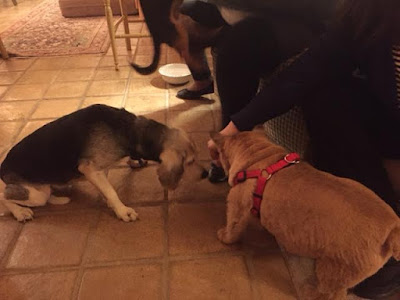 Petey with his cousin, Ted. 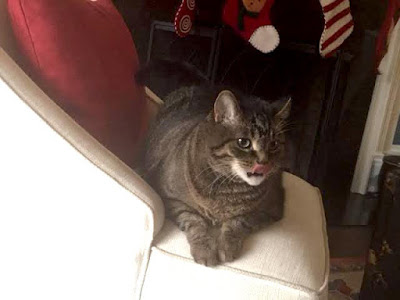 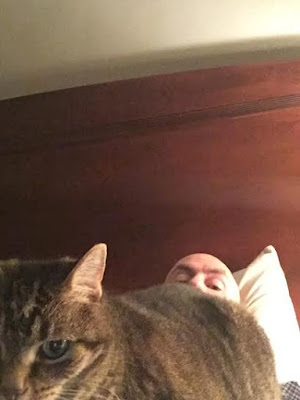 Sophie - planting herself on me, buttside first. I'd normally complain, but she was really warm on a cold cold day. 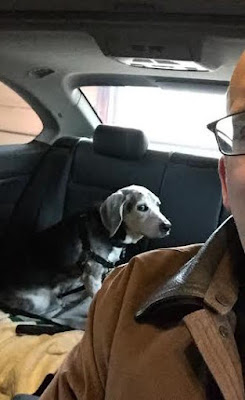 Giving that nasty side-eye'd glance to 710.

He had to take Pete to the vet.....again. He is back on antibiotics for a few weeks - and then on an inhaler 2x a day....every day....for the rest of his life. His respiratory system is too too fragile. It breaks my heart. One of us has been sleeping downstairs with him the last 3-4 days.


Well....onward and upward. Hopefully Mr. Pete rebounds as quickly as he's done the last few times - though this one seems to be a bit slower. Still, he is eating and drinking, so all are pluses. And he's been good about taking his pills.

Song by: the Indigo Girls
Posted by Blobby at 12:07 AM

Hopefully Pete bounces back to his "normal" self soon!

I was going to describe this post as being uplifting, but that concerning news about P's condition has taken me down a bit. Still, I've confidence you'll see that he's getting the best possible treatment. Meantime, my thoughts abide with him.

Petey is a trooper. An old guy who still makes new friends, plays and takes his pills.

On cold mornings, I, too, wake up with a cat butt in my face as Tuxedo likes to sleep on me.

The poor wee ting....he's lucky to have such loving parents...

I know you work in the health care field, but are you a nurse? You seem to know so much about health issues that most people aren't aware of (like pulses in extremities). Best of luck to Mr. Pete and Happy New Year to you and yours. ~~ NB

Just curious why Petey and 1 of you sleeps downstairs. Why can't Petey sleep upstairs in your room?