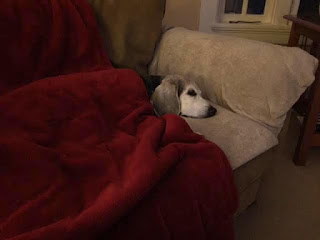 The Petey Cam is a good thing - and a worrisome thing.

710 tuned in yesterday to see Petey circling and circling on the floor and making coughing, shortness of breath noises. He texted me to tell me so, but unfortunately, I was in no position to leave work and go home.

Petey is the huge disadvantage to not working at home. Sophie can pretty much take care of herself. Petey? Not so much. He's a senior.

By the time the dog walker got there, Petey had two accidents in the house. That is SO not him.

710 rearranged his day, left work and got home. He also called the vet. Ruckiry (not Jon's boss), the vet tech who simply loves loves loves Petey answered the phone. While she first gave him an appointment, she changed her tune and told him to bring in Petey right away.

That made me feel a little better.

Petey was so short of breath they actually had to give him an opiate to calm him down. It seems counter intuitive but it worked. Of course, he had oxygen, a steroid shot and a pulse oximeter too. 710 had to leave him at the vet for four long hours.

As his lungs and throat were clear, meaning no signs of pneumonia at all (though to me he exhibited all the symptoms - even though he was fine when I left for work) the best the doc could come up with is that Petey had had some kind of panic attack.

Since I had a work dinner last night, I couldn't even come home right from the office. 710 had him all bundled up on the sofa (which is no doubt where I'll be sleeping keeping the dog safe and comfortable).

Though Mr. Pete is on an inhaler once a day for the rest of his life, he is now on a second one - - twice a day.

For a few days, until he rebounds (hopefully), the dog folks will come by twice a day. It's a small price to pay.

Someone once told me that getting old isn't for sissies.....was that you Spo?  This is the same for elder pets.

c'mon, petey, that's a good boy. get well soon; you worry your daddies (and us) so.

Sending all good thoughts for a Speedy Petey recovery.

Hug to you Petey, feel better.

This is heartbreaking. I don't know Petey, but from being a regular reader of your blog, I FEEL like I know Petey.

I believe it was Bette Davis who said "Getting older isn't for sissies". So sorry for Petey's troubles, and hope he's feeling better soon.