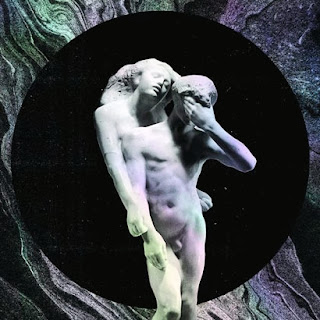 My Record of the Month posts have not quite been monthly this year.  I've been underwhelmed at the releases that have been coming out - as gun to my head seems a better option than say Katy Perry, Lady Gag Gag, or g-d forbid, Justin Timberlandlake.  NO thank you.

I held out hopes for the National's disk (meh!), or Natalie Maines (semi-meh).  But the big kahuna, for me, was going to be Arcade Fire and their new release Reflektor.

You know, I love the band and I want to like the disk more, but I don't.

I'll leave it for the hipsters (or whomever) to decipher Kierkegaard and the Orpheus and Eurydice overtones / references.  Or you can pick up at least two of Win Butler's questions of  'not knowing what is heaven for' and try to draw a line through the album for meaning.

For a band where excess doesn't seem to be enough, and that is a model that has worked for them in the studio and in live performances, they may have found a limit to their own experimentation. Some of their innovation gets in their way.

Of course there are parts and songs of Reflekor that I like, but overall as a two disk, 13 track release, it's not truly moving me. Sure, additional time and multiple listens might change that to a degree, but normally I have a good sense for what works for me and what does not.

I totally dig the title track. It took a few listens, but the vibe that is more Nile Rodgers in his Bowie / Duran Duran-era production days than it is James Murphy's LCD Soundsystem.  But it works.  If only more of the album could have been in this vein.

Reviews will tell you this is a "dance album". It is not. Nor would I want it really to be.  Could you dance to some of it?  Sure.  But just because Murphy is a producer, and there are few more electronics included, doesn't make it a disco / dance record.

Now, I think a good minute could have been trimmed from the title song, and from a few other songs that are on the full disk.

For what works, you know I like the title track. "Joan of Arc" totally works. It's got a good arrangement both musically and vocally.  "Normal People" actually shows that Arcade Fire can still be a rock outfit.

What does not work?  "Flashbulb Eyes". The electronic reggae-like beats aren't horribly conducive to a good listening.  I'm not sure I enjoy the "Billie Jean" bass beat in "We Exist".  "You Already Know" starts with Big Audio Dynamite-ish feel to it, and contains a most likely Haitian feeling that works slightly more than it did on "We Exist".

The bigger problem with "You Already Know" is the repeating of lyrics over and over and over. That might work for Murphy's LCD group and dance music in general, but it's not playing well with Arcade Fire.  This happens again in

I shouldn't be too rude, is it coincidence that "Awful Sound" was on for over four minutes before I snapped back into not having it as background music and realizing the song title was apropos. Elements of George Harrison that are good, but not enough to save the song.

Any song that is 11+ minutes long just becomes excessive for the artist's ego and usually leaves little satisfaction to the listener. "Supersymmetry" is no exception. Of course, there is a pause in the music and the last half (?) sounds like a hidden track played backwards, because THOSE have always worked so well for other artists.

Then there is the parts of the disk that I'm on the fence about:  "Afterlife" sounded so much better live on the YouTubeMusicAwards*. So I'm not so sure the music is the problem as much as the production. And that might be true of most of the album.

Overall, I think much of the music has potential as long as musical and production grandstanding doesn't get in the way - but it has crept in.  It will be interesting to see what they do with this in a live setting.  Since "Afterlife" wasn't drastically altered live, it shows there is much promise for the songs - but I'm not finding it in this release.


*the YTMA was music done live and videos filmed live at the same time.  Spike Jonze (director of any number of cool Fatboy Slim videos) helmed the videos. No edits and questionable in creativity, but a neat idea of performing and filming both music and video at the same time.  Arcade Fire really starts off weak until about the 1:10 mark, but it's worth watching.
Posted by Blobby at 12:05 AM