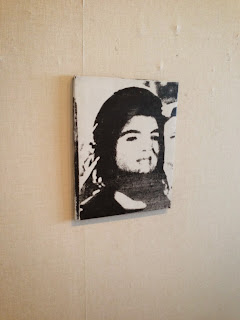 Do you remember where  you were?

I'm assuming I was in my crib, as I was only 101 days old.  But today is the 50th year that John F. Kennedy was assassinated.

Of course, I could have been in a high chair, though I think I couldn't have supported myself in there at that age, so we'll go with 'crib'.

I've made no secret that the JFK assassination was probably my first acknowledgement of some OCD-like behaviour.  I read the entire Warren Commission in sixth grade and started down a path of dozens of books about that day in Dallas.

After a while, you either got the scientific versions or the crackpot editions. Rarely did the two meet and even while I tried to stick to science, of course there were conflicting data elements and conclusions. Personally, I don't believe that Oswald acted alone....but that's just me.

Actually, it's not just me. A recent poll says only 24% of Americans believe Oswald acted alone.

I've never harbored any delusions on what a great man or president Kennedy might have been. In reality - he wasn't. His times in the House and Senate were short and plagued with long bouts of medical leave, so his experience was little.

As president, JFK's approval rating at the time of his death was around 49%. Only in death was he immortalized. He was a womanizing, back room, nepotism-prone politician. His father was corrupt, and clearly the Kennedys, even to this day, get preferential treatment from both the law and religion (seriously - you're married 20+ years, have four kids and the church gives you an annulment???). Bobby Kennedy prosecuted thugs (if Hoffa was considered a 'thug'), but in reality was one himself - the way he (mis)treated others.

That said, the country, if not the world, came together for three days 50 years ago.

Sure, 1963 was arguably a simpler time, but I'm not sure that could happen now - for an American president. Maybe for another Princess Diana, but not for an elected head of state.

As much as Kennedy's death possibly moved the passage of Civil Rights Act up measurably, the same is true with our involvement in Viet Nam. To be fair, Kennedy didn't start us in Viet Nam - that was much earlier - but he didn't help the process one little bit.

But the time of '63-'68 left an indelible mark on our history. Like the Kennedys or Martin Luther King, you can't say they didn't profoundly change the world - even if the former was more mob like mentality. People wonder how much more they would have done had they lived. In certain ways, I think things got accomplished much more quickly due to their deaths. Maybe that is harsh, but I believe it to be true.

Actually, a number of years ago (yikes! six!!!), I wrote a piece for a group blog, which no longer exists - Gay Men Rule. I just reread it and am still kind of happy with it - as it stuck with the theme of the meme.

But I've moved on. I'm not longer obsessed, compulsively or otherwise. Though I will honestly say I showed a little interest in the NYT article on Jacqueline Kennedy's pink suit.  And yes, the New York Times has a decent interactive site on the assassination.

Yes, cable has a plethora of shows on the assassination running this entire month. Some I've caught - some at which just to roll my eyes. And whenever I'm at Arlington National Cemetery, yes, I'll go to both John and Bobby's graves, but that's it.  No more books. It's all circumspect now and unless there are unreleased government documents, destroyed coroner records, missing body parts from the autopsy - and no actual truth to definitively be known - it's all left up to interpretation.

A half-decade later and no one really knows tons more than they did five years after the event.

No, this is more about the passing of time. Plenty of history has been made in my lifetime (the first walk on the moon or say, Charo's 17th guest spot on the Love Boat), but arguably (actually, inarguably, I believe), Kennedy's assassination is the first real demarkation of a lasting historical event in my life.

Where does the time go?

I took the title image, this past summer, at the Ogunquit Museum of American Art. They were setting up for a Warhol exhibit and I was instructed, "no photography" - flash or otherwise. You can see how well I listen.

This is part of a Warhol series called "Sixteen Jackies", which is by far my favourite piece he ever did. Of course, it all plays into that younger me, who was fascinated by that time in November '63.

I was in my 4th grade classroom. the principal came on the loudspeaker system and told us to get ready to leave; she never said WHY we were being dismissed earlier than usual.

when I arrived home, my mom was in front of the old b&w tv, crying. I did not understand why.

I wasn't born yet when both Kennedys were assassinated.

I wasn't born until the 70s, but I do find the Kennedy allure fascinating. Should you and the hubby come back to Boston via Ogunquit, I'd recommend checking out the JFK Library. It is worth visiting.

I was born a decade after, so no thoughts here on it.

But I did enjoy the Texas School Book Depository Museum in Dallas. Totally worth the visit if you're in the area.

Did you see the recent special where they finally allowed ballistics analysis of the bullets involved in the shooting. I thought that was pretty cool. The conclusion from that was that while Oswald had acted alone, the fatal bullet was an ordnance used only by the secret service and the speculation with respect to the entry angle etc. intimated that it was fired accidentally by a member of the secret service who had grabbed a rifle upon hearing the first shot and tripped whilst running. (and for some reason I hear the music from the x-files)