You know we joined Costco for their dog food. Petey, being the high-maintenance cutie that he is, can eat their salmon and sweet potato chow, since he is allergic to most meats and grains.

Anyways, since the food bag is 30lbs, we don't frequent Costco too too often. They do have other stuff I like  - the gigundo pack of granola bars. Sure they sell them in the grocery store, but the price for a box of 10 is only slightly different than a box of 60 at Costco.

The problem with Costco is all the other things you don't need, that you think you do, because they are on display.

Yes, I needed new heads for my electric toothbrush, and yes, they are expensive no matter where you go - but did I really need to buy eight of them, because that was the only way they were packaged? Or the 52 disposable razors? I needed like, eight of them, but you can only get one for each week of the year.

I rarely shop for food there, because as I've said in the past, I'm not feeding an orphanage. I don't need or want two pork tenderloins - there are only two of us. I'm sorry you don't sell single ones, but.... And I don't need 12 peppers - mix of red, orange and green. I like peppers, but 12 will go bad before I ever had the chance to use four of them.

Sometimes you're just not practical Costco.

On the other hand, there are deals there. Well, I assume.

I mean, when wouldn't you need this? 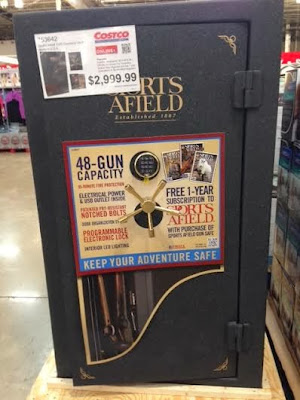 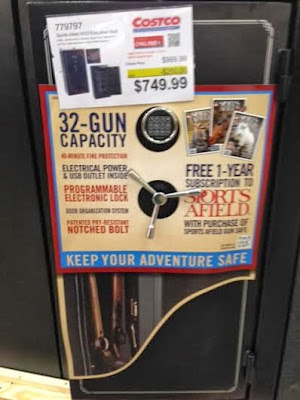 Please remind the parents from Sandy Hook that. Their panties are still in a wad that guns were killing machines. Go figure!

Still I haven't really done the math, but exponentially, the addition of 16 more guns really drives up cost quite a bit. I mean, a true bargain shopper could get two 32 gun capacity safes and still have it be $1400 cheaper than the 48 - and you can store way more rifles and ammo.

And if Costco were really doing their job, some nice senior would have been handing out venison samples right next to this display.
Posted by Blobby at 12:04 AM

I wish I were kidding but I did the math.

The people from whom we bought our house were burglarized after we'd signed the contract but before closing. All that was taken was their gun safe. I assume there were guns in it but who knows. Since it was too big to get into the house they kept it in the garage where it was easy for the thieves to drag it away so they could crack it at their leisure.

so that is a gun safe! I've never seen one before.

Was that right next to all the Duck Dynasty crap?