Love is a Battefield 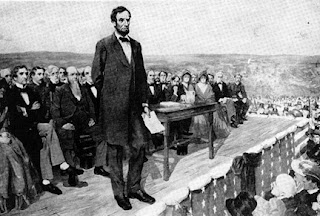 Today is the 150th anniversary of Abraham Lincoln's Gettysburg Address.  Only 268 - 273 words in length (depending on which draft one actually believes was delivered - there are five known), but it stands as one of the greatest addresses ever given in American history.

Oddly, Lincoln was not even the keynote speaker that day at Gettysburg, but he followed Edward Everett's two-hour speech with his own, which lasted a little over two minutes.

While it's doubtful that many of us know the entire speech by heart, I'm guessing most of us could recite the first line - and possibly the last. It is highly improbable that anyone knows any of Everett's oration.....unless you happen to be an Everett historian. Of course, that is the crowd I'm going for in my readership, so one never knows.

Ken Burns thinks it is a great speech too and has started Learn the Address.

People are uploading their readings of the Gettysburg Address - including all five living presidents. ...and Louis C.K.

Of course, others participating are the obligatory congressmen on both sides of the aisle, but you also get Whoopi, Colbert, Nina Totenberg, and esteemed historians such as, Martha Stewart, Alyssa Milano and naturally, Vicki Lawrence.

Apparently, Sherman went down to Atlanta to turn out the lights...for one night.

All visitors are encouraged (ok, invited, maybe not encouraged) to do the address themselves. And why not? It's a good history lesson, if nothing else.

There is a line in the Address where Lincoln couldn't have been more wrong:  "the world will little note; nor long remember what we say here".

Yeah, I took a shot at this - though I don't do well. I can do public speaking and possibly even give my own speeches, but to recite one - let alone one of the most famous ones - I don't do it justice. Even Alyssa Milano has me beat there.

I'd have been better off singing the title of this post.  ....but don't hold your breath on that one.

I have not decided to (or not to) submit to Ken Burns' site.

Indeed; i've heard tell the Address is considered one of the greatest speeches ever.
It was a pleasure hearing you recite it.

The moment I learned Ken Burns (a line poem - ha!) was involved, they lost me. The man single-handedly sucked the life out of the National Parks, and that really is hard to do. Especially whilst trying to view the endless documentary with children.

I love that you did this! And well done, too. Submit it!

Dedicate, consecrate - so THAT'S where INXS got the idea for your favourite song of theirs.

Nice job! And was that an Ogunquit fleece?

You did a great job. Submit it!

good one, blobby; SEND IT IN!

I think I want to hear you sing it now...