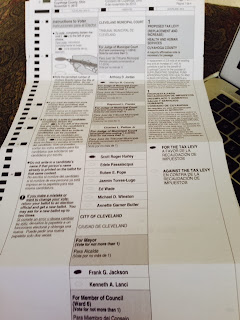 We have nothing major on the ballot, though I'm sure interested parties in some of the races of measures would disagree with me.

Yes, we have the mayoral race, a few judgeships, and some tax levies - some I'm voting for, some I am not.

Of course, I'll vote for the mayoral one. I'm not thrilled with either candidate, but one does seem to edge out the other.

The tax levies, well, such a stink about giving money to our Metropark system, if the letters to the editor were any indication.  Since most of the people who write in there are total nutbags, of course, I'll defy them and vote for the parks.

For those who haven't truly been to Cleveland, the Metroparks (or Emerald Necklace, as it is known here), are quiet a draw if you like hiking, biking, horses, golfing and, I think, fishing. You can canoe too and I'm sure a host of other things. Naturally, I would give to them.

As for judges, I'm much more careful about who I choose and better yet, whom I do not.

I think the natural reaction to people who run unopposed is to fill in that little tiny circle (if you're voting absentee), but not me. I leave it blank.

Well, next time that judge runs, and say he is not unopposed, s/he can "claim" he got x% of the vote, when no one will remember they ran against no one. Non one will remember s/he was unopposed and no media will remind anyone, so it's a hollow victory for me, but I feel I'm doing my part.

Song by: Ella Fitzgerald
Posted by Blobby at 12:02 AM

Most people in this area vote by mail (we don't call it absentee since one need not assert they are unable to visit the polls - just that one would rather not.

Our judges are not elected. They are appointed by the Governor and then at each election we are asked whether to retain them; Y/N.