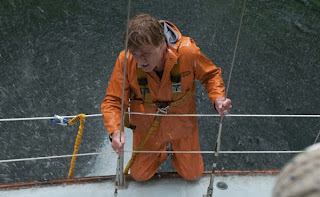 The male, earth-bound version of Gravity has arrived in All is Lost.

Let's just say, after Life of Pi, Titanic, Captain Phillips, Cast Away, and of course, the über-classic, Speed II  - any time at sea would seem to be more advantageous to, oh say, Leon Klinghofer.....or Jason Patric's career, after oh say, Speed II.

Like my review for Gravity - this could also be subtitled:  I Cannot Catch a Break!

I do love how Robert Redford (the only cast member) is being praised in reviews as 'brave' for taking this role. No offense to Mr. Redford, who does a very fine job, but at  age 77, being consideration for any role might be limited, at best, so maybe "lucky" could be substituted for "brave".

Oddly, the studio marketing department didn't try to sell All is Lost as 'the feel bad movie of the year'. They easily could have.  Maybe they thought it would be harder to drawn an audience in with that tagline, than one hour and forty minutes of almost zero dialogue.

Still, there is something to be said for a movie that is about complete and utter isolation. Life of Pi and Cast Away incorporated a pre and post story. Lost does not. Yet to a degree, if not fully, the man's isolation is a choice, just not necessarily under his current circumstances.

I'd say the ending could be open to interpretation, but I really don't think it can...or is. I mean, the movie isn't called All is Potentially Lost.

And now that I am over 50, how is it still possible that we aren't on the older side of this audience? Seriously, except for 2-3 folks, everyone was a 'senior'. Sure, it was late afternoon movie, so the elder-home bus must have dropped off their residents two minutes before the movie started....as they ambled very very slowly to their seats. Then there was the unwrapping of the hard candy in foil.  My lord!

Oh - and you should have seen / heard the ghoulish crone sitting next to me who laughed - laughed!!!! - out loud, each and every time something worse would happen to Redford's character. What the fuck was that about?

There weren't any 'must-see' previews, but perhaps the new Coen brothers movie. Maybe. There's a cat featured prominently in the trailer, and you know, movies with animals rarely end well for the animal. I can't possibly take the suspense of that happening.

There better be something to see  - we still have five more to go.

Yeah. No desire to see this film.

How sad is it that I've never even heard of this movie?! But your review is hardly a glowing endorsement, so I'll wait for Netflix on this one.

I used to see about 45 movies a year. Not sure why I stopped, but I probably can't meet your goal.

I would have tried to nap.