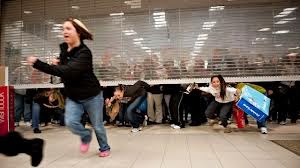 It's been done 12,000 times by other bloggers, writers, news folk - but ugh on Black Friday.

It's not that I care so much about the sanctity of the holiday and not opening stores at 06:00 on Thanksgiving - or anytime during that day.  It is more the stupidity of the shoppers.

Personally, I don't care if these asshats get trampled to death. It's Natural Selection at work.

Proven time and time again that these are NOT the best deals of the season, nor is it the busiest shopping day of the year, I see no reason to sit out in the freezing cold (now no longer overnight but currently for 3-4 days ahead of time), to get one shitty off-brand TV. But you can't tell these uneducated, non-news reading, souls a thing....unless it's Sarah Palin telling them what and what not to do.

If I never set a foot inside a store from November 15th - January 20th, I'm a happy man. There is very little that I cannot get on-line and the stuff I want to acquire for people most likely won't be found at the big box stores.

I feel worse for the Pizza Hut manager who got fired for bucking the system and closing on Thanksgiving - though allegedly that day has a high rate of pizza deliveries. Supposedly, Kentucky Taco Hut is rehiring him, but in a way I hope he does not accept.

In my mind, I already have the things I need to buy - some are already purchased, but that was a place / time rationale, not a "deal" to be had. Either way, it's going to be a light year, and that is just fine.

And now that stores are open at 06:00 on Thursday, can "they" even call it Black Friday?

(stands up and applauds loudly)

Meanwhile, the smart people like us point, click and buy. I should have new clothes and a handbag delivered by next Friday at the latest.

There is no "black Friday deal" so good that I would camp out in front of the store, stand in line for hours, or brave the potentially dangerous crowds on black Friday. Not gonna happen. I did a little online shopping today only because I had some slack time at work.

Yay for Natural Selection. There needs to be more of it.

They go to the bathroom in a knotted up parka sleeve.