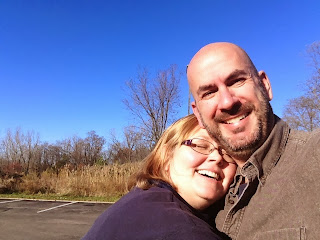 You know, Facebook has a lot of reasons to be a bad thing. I suppose, like anything, it is in how you use it.

I know people who have 700+ "friends". C'mon - they don't even "know" 700 people. But the mentality is those with the most friends wins.   ....and then they block these friends, but still count them in their bucket.

Me? I have no use for that. Hell, I even ignore immediate family member requests. Granted, I have a handful of people who know me through others (though I've never actually met), and a few of you who follow this here blog (whom I have never actually met....yet), but for the most part, those I connect with are friends and a few cousins, whom I counts as good friends.

Anyhooooo - I've done this on and off series of posts on how I know my closest and dearest friends. Ok, technically, I've only truly written about Becky and Meredity. Oh, you hear a lot about Morty and Jon, but not the true origins. I'm sure those will come in time.

Kind of. Maybe more than kind of.


Around two years ago, I accepted a FB request from someone I will call "Girl Jackie". I call her that, because that is what we all called her.

She gets the qualifier as "girl' because in the soon-to-be periphery, there was a Boy Jackie. I even think, and Morty can correct me, there was a Black Jackie somewhere in that mix. But there had to be qualifiers so people would know which Jackie you were referring.

Even though I had not seen nor heard from Girl Jackie since maybe 1990, she played an ginormous part in my life. And Jon's.  And of course, to Morty, Ditto and Becca.

One fateful night, Jon and I went to an after-hours party at a big empty, soon to be refurbished, house on Columbus' east side. It was there we encountered Girl Jackie.

She was a social butterfly, who had no problems talking to anyone. She and her friend, Susan (Morty / Rebecca / Jon - Susan Lee was her name. I'm not crazy!  She existed) chatted us up and Jackie, with her sing-songy hands, insisted we meet her friends, Morty and Mitchell.

See back then, Girl Jackie would talk as much with her hands and her mouth. Not that she was using ASL, but she seemed to have broken wrists and they'd kinds of lightly flail about as she talked. She'd cock her head side to side a lot too as she spoke. It made her seem a bit, well, flighty. More than she actually was.

Morty was nice and great to talk to. Mitchell, wellllllll....he was a little cold and aloof. Of course, after we parted ways with them that evening, Jon and I immediately talked how Mitchell hated us. We would hold onto that belief for years.

To be fair, and I did love Mitchell, at first he probably thought we were hitting on Morty, as they were dating at the time. And we probably were flirting, though Morty wouldn't have recognized it if we were hitting him over the head with a 2x4.  He might have been drunk!

Later, Mitchell would just be annoyed with me, because on a daily basis, I would most likely be drunk, hanging out with his equally drunk roommate. We were annoying, so he had every reason to roll his eyes and just go upstairs and leaving us be.

Later in bars, Girl Jackie would find us and again reintroduce us to Morty and Mitchell.

Morty, being super social, (I think) invited us to parties, usually where he lived. And it was there a friendship began. That friendship begat ones with Meredity and then Rebecca.  Sure there were peripheral acquaintances too, but the core group was kind of set.

No way Girl Jackie could know what she was doing then - not that we could have either.

Sure it was possible at some point we would have made Mort's acquaintance, but it didn't seem likely. Girl Jackie was a catalyst for a lifetime of friendship.

The irony (?) is that she, being possibly the most social, dropped away and eventually moved to Australia, not that any of us knew that. Until Facebook.

Girl Jackie is back in Ohio for a few weeks visiting family. She made the 9,800 mile trek here, so I felt I could take the last 21 miles to meet her for lunch yesterday.

We had a great time. Though 23 years had passed, it seemed a breeze to chat with her and just kind of catch-up. I've long given up on trying to fill in with people the last two decades of missed connection. And she could piece some of it together from our FB posts anyways.

Hopefully, since she's here for another 12 days, we will be able to get Rebecca and Morty together with us for one more lunch. I'd like Meredity to go too, but I know her plate is full these next few weeks.

So, as lame as FB can be, seemingly for many many 'what I ate' pictures, it does have some usefulness.

Bring on the OWN or Lifetime movie staring James Franco as you and well... we know you don't care who plays the others although I am personally casting Kate Winslet as Becky.

I love the picture! Can't wait to see her.

Anonymous just made someone very happy!
Just last night Rebecca and I were trying to remember how we met you guys. I remember the 1st and 2nd times I met Morty, but no one else. I wasn't hitting on him, either.

how lovely; thank you for sharing this.