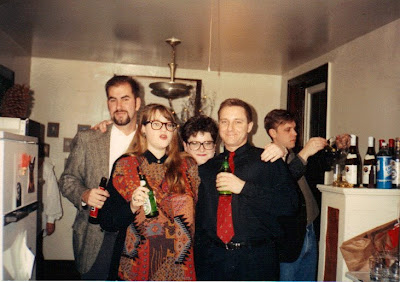 I rarely acknowledge friend's birthdays here. I even try to avoid speaking about mine.

I mean, we all have them, so if you think my My Music Monday posts are banal, can you imagine if I wrote about everyone I know when they had their special day?

But I can break the rules, since it is my blog.

Today is Meredity's b-day. She's the one in this 1989 (?) picture looking like Michael Musto.  Sorry Dith - sad, but true.  But it says more about him than it does about you.  You've moved on from this look.

Yes, that's me on the left.  Deal.   ...and yes, everyone else is drinking Heineken while I'm drinking Black Label.

Anyways - way back in 1988 (?) Jon and I started hanging with Morty, Becky and Dith.  It was early into our group relationship and we were invited to Meredith's birthday and Gary and Jeffery's house.   Jon and I were trying to figure out how old she was and seemed a little surprised when we found out it was her 21st  Either way, she just didn't seem that young.  It was clear neither Jon or I would get jobs on a midway guessing peoples ages.

And since we didn't know her all that well way back when, and not wanting to go to a b-day party empty handed (and being pretty broke between the two of us), we chipped in and bought her an album.

It wasn't something lame like some hip, college, alternative band.  Noooooooooo.

We got her an album of Sound Effects.   All I can remember on it was wind and train noises.  Sure, someone put it on at the party, but it was twenty-something years ago and it is quite possible I was drunk.

Many of those people at that party we rarely saw again, but our core five (seen above) remain to this day.

Happy Birthday Ditto.  I mean, not that you'll read this - because I don't think you really read my blog.  Can you imagine????

Song by: Lori Carson
Posted by Blobby at 1:37 AM

Thank you, Blobby. Love you.

Why do I feel like this belongs in a John Hughes film? ;-)