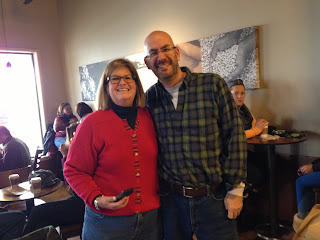 I just don't have tons to write about.

I had lunch with a college friend.  One I have only seen a handful of times in the last two decades.

I loved Lori. I still do.

From the first month on campus, she was one of my favourite people in the world.  I liked her sister and parents -  she liked the one sister of mine she met and my parents.

Folks in my fraternity tried to fix us up because we both wore tortoise horn rimmed glasses and Norwegian fishing sweaters from LL Bean.  Is that a reason to date?

But we just hung out.....mostly because you know, I didn't like girls "that way".   She went on to marry an ex-Ohio State football player and I of course, did not.

Anyways, she was in Akron as her son being reviewed by college soccer coaches, and she and I went to lunch.  It was a great time - but it always is.  We caught up on family and work and the promise to make a better effort when I'm back in Columbus or she's up here. It seems like a good deal.

For shits and giggles, I took a picture of a picture we had taken back in 1982!  I promised not to show anyone, but she doesn't know this blog exists, so just don't tell her.....ok?? 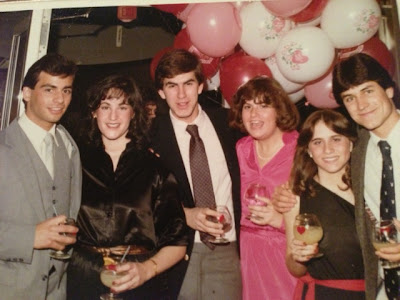 Yes, I had hair.  And I was drunk.  Notice the alcohol spill on my pants.  What a waste of booze!

It was Lori's sorority thingy and I was her date. The funny thing was, she showed this same picture to her son when he asked who she was meeting.  Lori and I had a great time that night.  So did Shari in the black (next to me).

Poor Jeff on the far right.  First, he was my fraternity brother and I had a major crush on him....and he was way more handsome than this pic allows. He's even way more handsome today.  But his date?  Oy, his date.....Susie.  Whatever Jeff ordered, Susie just declined to order anything, saying "I'll just have some of his".  Jeff looked at me wide-eyed....not just thinking she was cheap (she was), but that she would infringe on his meal (she did)l.

Neither Lori or I have a clue who the guy with whom Shari is pictured.  He seems cute enough, but we guessed it seemed like a one date thing.

So that's what I have to write about - except that here's an odd fact:  if you take pain killers, it stops the hurt one might have had in his hands for a few weeks.  Crazy!!!

Song by: the Moody Blues
Posted by Blobby at 1:09 AM

I would have had a major crush on jeff too. WOOF!

This was a really good post - revealing, fun and with a pic but the disclaimer took it down a notch. No more disclaimers please.

It is a lot of fun to look at old photos of ourselves and get a good laugh. It is still a good thing this: to laugh at our youthful ways.

You kind of look... sinister... in that picture. The old one. Not so much on the newer one.